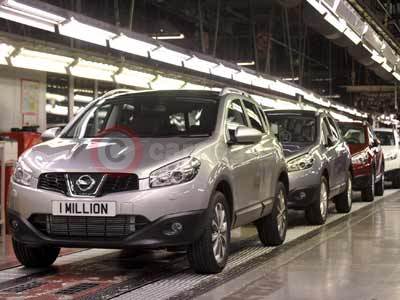 The one millionth Nissan QASHQAI has been produced at Nissan's Sunderland Plant. The one millionth model comes four years, six months and 23 days after production went underway on 5th December 2006.

The Nissan QASHQAI 2.0 litre diesel TEKNA model will go on display at the O2 Arena in london, with a competition to win it.

Kevin Fitzpatrick, Nissan Vice President for Manufacturing in the UK, said: "The Nissan QASHQAI has been a phenomenal success since its start of production just four and a half years ago. QASHQAI was a real crossover pioneer and producing one million in such a short space of time is a fantastic achievement, not just by staff at the Sunderland Plant, but also by the designers and engineers who developed such a popular car and our dealer network who have helped to generate such high demand."

UK Business Minister Mark Prisk said: "The QASHQAI is a success story for both Nissan and the UK. With the millionth car coming off the production line, the Sunderland, Cranfield and Paddington workforce should take great pride in its popularity.

It's great news that they will be able to build on their success with the recent announcement that the UK has been chosen to design, engineer and build the new QASHQAI model."

Paul Everitt, Chief Executive of the Society of Motor Manufacturers and Traders, said: "The UK is home to some of the world's most productive automotive facilities making cars that are in demand across the globe. Landmarks such as today's announcement from Nissan serve to reinforce this, demonstrating the importance of manufacturing to our economy and its contribution to an export-led recovery."

The Nissan QASHQAI has been one of Nissan's most successful products, with a third shift being added in June 2008 on Line 1 at Nissan Sunderland Plant in order to keep up with demand and allow for 24 hour production. This was withdrawn in January 2009 due to the financial crisis and then reinstated in May 2010.

An average 1,200 Nissan QASHQAIs are produced every day at the plant, which equates to one for every minute the production line is working. 80% of Nissan QASHQAI production is exported to 97 worldwide markets.