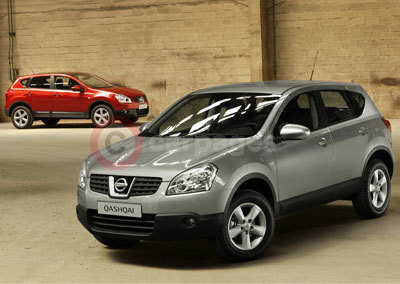 Nissan's compact Crossover the Nissan QASHQAI has been rated 11th overall in the JD Power/What Car? 2009 UK Vehicle Ownership Satisfaction Study of 101 models, its first appearance in the survey.

With a rating of 81.4% the Sunderland-built Nissan QASHQAI rated 3rd in the SUV category and also higher than all of its traditional C-segment competitors including the Honda Civic, Volkswagen Golf, Audi A3, Ford Focus, Mazda3, Vauxhall Astra and Renault Megane.

In terms of SUVs, the Nissan QASHQAI eclipsed the Mercedes Benz M-Class, Land Rover's Discovery, Freelander and Range Rover Sport, and Volvo XC90. It was only bettered by Honda's CR-V and Lexus' premium RX.

The Nissan QASHQAI scored well among respondents in particular for its low ownership costs, visibility and design.

Another strong showing came from the Sunderland-built Nissan Note, scoring 80.1% and in 29th position overall. Note owners responded positively to its interior practicality, as well as the robustness of its mechanical parts and bodywork, while dealers were praised and running costs were low. Overall, the Nissan Note was placed fourth in the Supermini category, ahead of Mazda's 2, Skoda's Fabia and Volkswagen's Polo.

Such a strong showing for the Nissan Note and Nissan QASHQAI is particularly satisfying as the Nissan QASHQAI was designed at Nissan Design Europe, in Paddington, London, and like the Nissan Note, was engineered at the company's European technical centre in Cranfield, Bedfordshire, while production for Europe of both models takes place in Sunderland.

Since its introduction in March 2007, the Nissan QASHQAI has sold over 330,000 units in Europe, making it one of Nissan's most successful models globally. The range was reinforced at the end of last year with the introduction of the Nissan QASHQAI+2 family crossover, which boasts a longer wheelbase, larger trunk and a collapsible pair of seats in the third row.

The Nissan Note was introduced in Europe in March 2006 and European sales for the compact family car have passed 260,000 units.

Speaking about the results, Jim Oliver, Nissan Manufacturing UK's Director of Quality Assurance, said: "For QASHQAI to be ranked 11th overall in its first appearance in the JD Power/What Car? 2009 UK Vehicle Ownership Satisfaction Study is the result of Nissan's long-term global commitment to delivering outstanding levels of quality, not just in terms of engineering, but in customer service too.

"Quality remains a key priority for Nissan worldwide and this kind of independent recognition from our customers is a testament to the dedication of Nissan's world-class workforce in constantly striving to raise the bar in terms of quality."