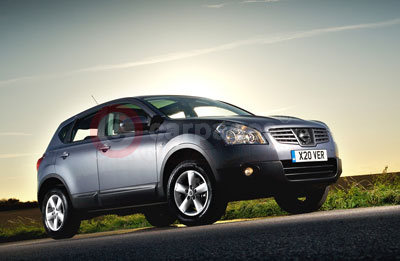 Nissan’s QASHQAI has picked up another gong, rounding off a great debut year for the compact crossover whose all round qualities have captured customers’ imaginations. The BBC Top Gear magazine team have named it best SUV in their 2007 Awards issue, on sale now.

They liked its sensible pricing and the great visibility made possible by its raised driving position.  On the road they were impressed by the frugal and perky 1.5 dCi engine, the car’s agility and composure, light but accurate steering, supple ride and a body free from excessive roll.

But what shone through above everything else was the Nissan QASHQAI’s reassurance, as the team explain:

“The QASHQAI is your mum’s big hug outside the nursery school gates, it’s your dad palming you a tenner on your way out to the pub, it’s your girlfriend rubbing your head when you’ve been flattened by the flu. This is a car you can rely upon, that’ll take care of you, that makes you feel like the world is just that bit more manageable.”

The magazine was particularly taken by the solid and classy interior: “A car like this, duty bound to be aggressively bothered by children and wet dogs all its life, needs to be hard-wearing, but a modicum of luxury remains crucial. The QASHQAI really does seem to have it all covered.”

The Top Gear magazine viewpoint endorses Nissan’s own customer feedback which shows that buyers like the QASHQAI for bringing something new to the market, and for its strong, distinctive design which sits between a traditional hatchback style and a more robust elevated SUV shape. This is a fusion of the best of both worlds.  Fusion is the idea and QASHQAI is the result.  And buyers have consistently cited its premium quality interior as a key factor in changing brands to Nissan.

Top Gear magazine speculates that QASHQAI’s appeal may lie in the unique cultural symbiosis that gave rise to it – Japanese know-how, the London based design studio, engineering development in Cranfield, Bedfordshire, and produced at the “holier than thou” Sunderland factory. “It’s small wonder the QASHQAI seems to slot so well into the British psyche.”

It’s been a catalogue of good news for the QASHQAI since its launch last March, with sales outstripping forecasts throughout Europe, production at the Sunderland factory increased to cope, and a maximum five-star rating for adult occupant protection awarded by Euro NCAP – with the highest ever recorded score for any vehicle.

And to cap it all, a team of drivers piloting a standard 1.5 dCi model from Land’s End to John o’Groat’s achieved an overall consumption of 67.35 mpg over the 867 mile run on a tank of fuel, leaving seven litres still remaining.

A final word from the Top Gear magazine jury: “Just concentrate on number one for a bit, think about what you want from a car, day after day after wet, crappy day, and – unless you’re fundamentally misguided, or five – you’ll always come back to the deeply reassuring QASHQAI.”