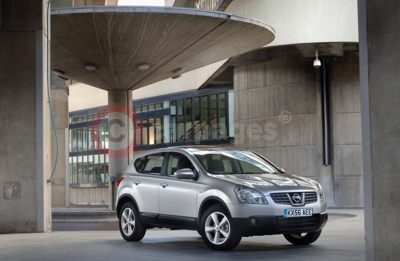 When a car company thinks lean, it's usually about manufacturing - how to make more for less. But when car designers think lean, they're thinking of something entirely different - a muscled surface, an athletic form, some tensioned panelwork. Which is how Nissan Design Europe's Design Director Stephane Schwarz happened on a striking sculptural flourish for the company's new QASHQAI crossover.

He was at home in his London flat, musing over the meaning of 'lean', prompting thoughts of the tensioned limbs of athletes. And that was the inspiration that produced the 'bone-line' that's such a distinctive styling feature of the new QASHQAI compact crossover, creating a graphic signature that's echoed by the twin bulges in the bonnet.

Schwarz humbly offered his domestic doodle to his fellow QASHQAI creatives. They liked it, and chose to start the crease from just behind the front wheel-arches, from where it gently rises along the QASHQAI's flanks to flow in to the rear lamp clusters. It may only be a fold in some metal, but it plays an important part in defining the QASHQAI as a crossover, reckons Schwarz, by providing the 'shapeliness and sportiness that makes the car's dual function clear.' So there you have it - a defining line.

Schwarz's flat might have been an incubator for the occasional idea - 'a non-professional environment can be inspirational because you're uninterrupted and can get to the essence more quickly' - but much of the QASHQAI was crafted in a one-time British Rail maintenance depot in Paddington. It's the home of Nissan's European design studio, an ideal birthplace, reckons Schwarz, for a car he describes as an 'urban nomad.' 'It is a car of contrasts for a world of contrasts,' he says, 'tough and compact for the city but sleek and agile for journeys away from the town. It reflects our personalities, our imagination.' In other words, the QASHQAI has drawn on multi-cultural London for its inspiration - it is, after all, a European car, created for European buyers.

London's melting pot also makes an ideal location for crafting a car that's a vibrant blend in itself. The QASHQAI mixes the agility and comfort of a hatchback with the practicality of an SUV, and all in a fashionable wrapping. So the QASHQAI is taller than your average hatch, takes up no more road space than a Ford Focus and looks distinctly sporty to boot. 'It doesn't shout at you the way SUVs do,' says designer Schwarz. 'It isn't as aggressive, but it's assertive in the way it sits on the road.' How did his team achieve that trick? By fusing a light, elegant and sporty upper body to a tough, planted lower body.

The QASHQAI provides the high seating position that owners of 4x4s like. In fact, the cabin will impress not only for the view it provides, but also its satisfyingly high standard of finish. Stand-outs include the high quality surfaces of the dashboard and the high-precision finish of the aluminium that highlights the wheel, instrument pack, air-vents and centre console. 'We've taken a lot of trouble with perceived quality,' says Schwarz. 'I like the fact that there is craftsmanship in it, even though we use so much technology.'

It's a craftsmanship you'll also find in the QASHQAI's seats. Their panelling and stitching make them a more dramatic feature of the interior, besides underlining the car's dynamic character with their sporty bolstering. That same sportiness is echoed in the driver's environment, the clustering of instruments and controls providing 'a cockpit feel,' he says.

Schwarz's brief for the QASHQAI was to 'Design a car for people who are tired and bored with traditional functionality.' It's a brief that clearly inspired him - even at home in his London flat.

Background fact: The QASHQAI (say it as Cash-Kai) are a nomadic desert tribe living near the Zagros mountains in south western Iran.

About QASHQAI The QASHQAI is a striking new five-door crossover from Nissan combining the advantages of a compact SUV with the agility and comfort of a hatchback. As such its main rivals will be cars like the Volkswagen Golf and Ford Focus.

The QASHQAI goes on sale 1 March 2007.  Its range includes 2.0 and 1.6 litre petrol engines as well as 2.0 and 1.5 litre turbodiesels - the 2.0 litre models can be equipped with ALL-MODE four-wheel drive. The QASHQAI has been engineered for an agile on-road drive across all versions, while the optional ALL-MODE four-wheel drive system of the 2.0 litre models increases their security in wet weather conditions. Conceived, designed and developed in Europe, the QASHQAI is manufactured solely at Nissan's award-winning UK plant at Sunderland from where it will be exported to markets as far away as Japan.