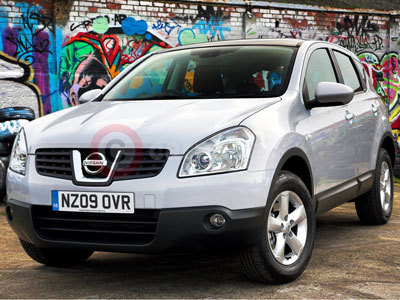 Good news for Nissan and great news for the British car industry: the Nissan QASHQAI has become one of the top ten best selling cars in the UK.

The latest SMMT car sales figures have been released, placing the unique Nissan QASHQAI crossover model in ninth place in the top sellers list with a total of 2,629 buyers taking delivery in May 2009. Finishing ahead of several mainstream rivals, the Nissan QASHQAI has proved that when it comes to choosing the ultimate in style, practicality and value, drivers are voting with their feet.

Not only is it ninth in the overall sales chart, but the Nissan QASHQAI has managed to increase its market share from 2.55 per cent to 6.64 per cent. In growing market share, Nissan is bucking the downward trend in the market. A total of 4,562 Nissan cars were sold in May 2009 - that's only seven per cent down on 2008 in a market which is down 25 per cent.

What's more, because every Nissan QASHQAI is built at Nissan's Sunderland plant, its success is a shot in the arm for UK manufacturing and the British economy. That's why Nissan is offering further incentives for customers to buy British with its Trade-in and Scrappage schemes. As well as taking part in the government's standard Scrappage scheme, Nissan is offering a £2,000 minimum trade-in against any of its Sunderland built models for owners of cars aged between 8-10 years old.

During 2008, one in every six cars built in the UK was a Nissan QASHQAI, giving a solid foundation for the sales success of 2009.

Nissan's UK MD, Paul Willcox comments: "We're delighted with the QASHQAI's jump into the top ten best sellers list. We know it's one of the strongest models on sale in the UK, and this result is proof that the car buying public agrees! Once again Nissan's daring design has been rewarded, benefiting the UK manufacturing industry in the process."