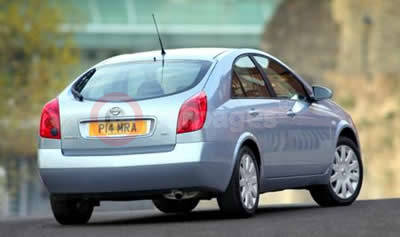 Nissan’s Primera range was revised and revisited in 2004 and the line-up expanded to include a new SX version sporting big wheels and big equipment. Mistake - the new SX didn’t have satellite navigation, which is what punters want. Well, it does now. And it’s priced at less than it was before.

To fix the situation, Nissan is brutally killing off the Primera SE and replacing it with an SX with added DVD ‘Birdview’ satellite navigation system including automatic traffic monitoring. They’re officially the same price - £15,750 to £18,650 - which you can view in one of two ways. It’s a rise of £500 for the SX in return for a sat nav system some companies would charge £2000 for. Or for the same price as the now defunct SE, buyers get an SX that adds 17" alloys and a 6CD changer for nowt. Except unofficially the SX is not the same price as the SE.

As part of a range of customer offers, Nissan is paying for its mistake by slashing the price of the SX five-door by £755 and the Estate by £1355. That makes the SX with added sat nav as much as £855 LESS than it cost before. And it’s now available with three years 0% finance (plus a 40% deposit, please) just like the Primera SVE and T-spec. Prices include satellite navigation system and a slice of humble pie.

Nissan Primera Images may not be UK specification cars. Colours and exterior and/or interior elements may differ from actual models.