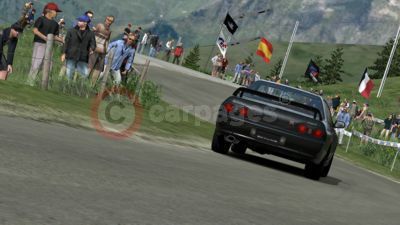 Nissan’s stand will be the first stop for video game racing fanatics visiting this year’s Geneva Motor Show. That’s where they will find Sony’s new PlayStation 3, equipped with Gran Turismo HD Concept, which will be there exclusively available to try.

Sales of the new, eagerly-awaited games console begin on 23 March across Europe and Nissan’s stand at the Geneva Motor Show will be one of the few places the public can try it out before the console hits the shops. Nissan expects long queues as there are only three consoles on the stand and security will be increased to ensure that public order is maintained.

While the gamers are visiting the Nissan stand, they will also be among the first to see a new model that Nissan will unveil for the first time in the world on 6 March 11:15 am. No details will be released before that time.

Nissan has featured prominently in all of the Gran Turismo games, allowing on-screen racers of all ages and abilities to compete in dozens of Nissan models from the past, present and even the future, on some of the most challenging circuits in the - real and virtual - world.

When Gran Turismo 4 was launched two years ago across Europe, one of the stars of the marketing activity was Nissan’s vivid yellow 35th Anniversary 350Z.

To demonstrate that the automotive and console-racing worlds move at equal breakneck speed, the newly updated 350Z will also be on display at the Geneva Motor Show. Boasting a new generation VQ engine - dubbed VQ 35 HR - power has been increased to 313PS (230kW) at 6800rpm and torque is now 358Nm at 4800rpm, while the maximum engine speed is now 500rpm higher at 7500rpm. Nearly 80% of the model’s major engine parts are new, resulting in improved acceleration and responsiveness.

To accommodate the new engine, the front bonnet has been discreetly redesigned and is now reminiscent of the original 240Z, thanks to a slightly raised profile. Three new exterior colours will also be offered, including Temper Orange, a striking shade which contains a subtle green “flip” that can be seen in soft light and gives the car a surprising tone. The other two colours are Precision Grey - a new grey - and Night Blue.

In Gran Turismo HD players start with one car on the Eiger Nordwand track in the Swiss Alps. When the track is completed within the time limit, another car is unlocked. There are nine further cars to unlock in this way. Furthermore, Gran Turismo HD Concept’s Time Trial will bring into effect the first Gran Turismo online rankings system, allowing players everywhere to see how their performance compares with their peers.

Paul Willcox, Vice President, Strategy and Marketing, Nissan Europe said: “We are delighted that the new PlayStation 3 with Gran Turismo HD will be on our stand at the Geneva Motor Show. Sony’s passion for virtual racing matches our passion for making cars that are great to drive, as epitomised by the newly updated 350Z.

“It’s going to be even busier than normal at Geneva for Nissan this year thanks to the world premiere of a key new model for us,” he added.