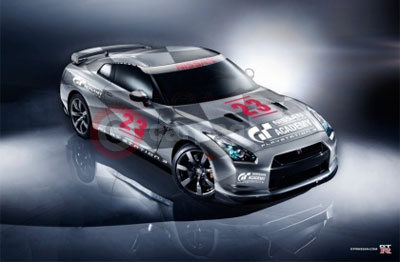 PlayStation and Nissan have come together to create the ultimate competitive driving test - GT Academy. The eight-month, pan-European competition sees virtual and real-life racing merge to make the wildest dreams of two aspiring race drivers come true. The prize: a four-month training programme to earn their racing licences, followed by a real-life race driving a Nissan 350Z as part of the Nissan team at the 24H endurance race in Dubai in January 2009.

To earn a place in GT Academy, candidates will face a series of elimination-based competitions on and off the racetrack - starting at a national level with an online GT5 Prologue tournament hosted on PLAYSTATIONNetwork.

Roles were reversed in 2007 when Nissan called upon Polyphony Digital to design the interface for the onboard computer for the GT-R, Nissan’s new supercar. The ‘multifunction meter’ provides drivers with updates on the car’s performance and systems – a collaboration recognised as a motoring industry first. In the latest game, Gran Turismo 5 Prologue on PLAYSTATION3 (PS3™), Nissan’s GT-R joins a garage filled with 71 dream cars including seven other top Nissan sports cars.

“Gran Turismo is one of the most successful global gaming franchises of the last decade and is renowned for its realism, quality of design and in-car physics technology. PlayStation is now part of the global motor sport community from its games to its Gran Turismo TV channel – and now the GT Academy. The academy brings the real and virtual worlds of racing together and is the ultimate test to see if virtual drivers have what it takes to race in a competitive environment where there isn’t the option to play again.”

“We're delighted to build on the close relationship between Nissan and Sony PlayStation. This represents the competition prize of a lifetime for racing enthusiasts; a prize that brings the worlds of gaming and racing even closer together. We look forward to welcoming our new team drivers for the race in Dubai.”

GT Academy goes live at the end of May. Entrants must register, via their PS3s, on the PLAYSTATIONNetwork (PSN) to compete in the special online tournament. Gran Turismo 5 Prologue on PS3 has sold over one million units since its launch, with the Gran Turismo franchise now having sold more than 50 million units worldwide.