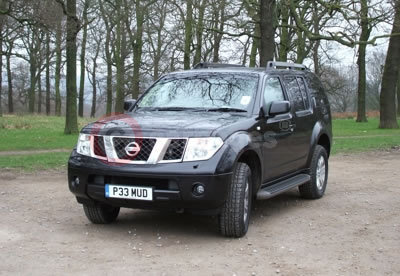 If you include the 4x4 version of the new QASHQAI, Nissan can now boast a list of six off-roaders.

They all fill a niche in different ways; the outright 4x4 workhorses are the Patrol and Navara, the so-called Crossovers come in the form of the Murano and QASHQAI and the SUVs are the X-TRAIL and this week’s test car the Pathfinder.

Although not quite as large as the Patrol and Navara, the Pathfinder is nonetheless a large vehicle and a very imposing one at that. Based on the Dunehawk design study that was first seen at the 2003, Frankfurt Motor Show, the Pathfinder was introduced as a rival to the likes of the Land Rover Discovery 3, Volvo XC90 and Mitsubishi Shogun and is competing well, according to Nissan.

The Pathfinder looks stylish enough, especially in black but to be honest, I can’t see it appealing to the school-run mums. The reason is that it is a little too masculine compared to some others in the market sector, which now tend to have softer, rounder curves rather than the angular appearance of old. That said, the Discovery 3 can be tarred with the same brush.

It’s not much of a poll, I agree but in order to gain an opinion as to whether it would be a favourable choice for mums, I asked my sister, who is 5’4” tall, to make herself comfortable in the car. She said that she didn’t like the fact that the bonnet was squared off and that she wouldn’t feel comfortable manoeuvring in tight spaces and, despite the running boards, she had difficulty getting in and out. It is actually shorter than a Vectra Estate.

I liked the car. It looks big and bold but, despite her opinion, it isn’t unwieldy and the practical aspect of having 7-seats would make it a perfect surrogate school bus. The Pathfinder comes in three versions; the Trek, which is a 5-seater and the Sport and Aventura, which have seven seats.