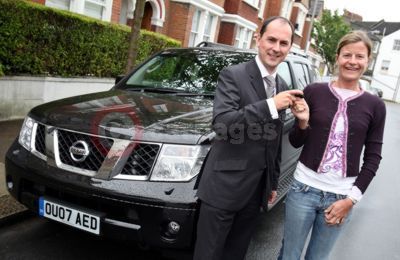 London-based Sarah Ryan visited the Vue cinema in Fulham Broadway as part of the Nissan Adventure Film Festival and her intrepid spirit has seen her drive away in a top of the range Nissan Pathfinder Aventura worth £30,000.

Film fans from all over the country visited their local Vue cinemas to watch a whole host of adventure documentaries as part of the Nissan Adventure Film Festival. Each visitor who watched a film as part of the festival was entered into a free draw to win one of a huge selection of incredible prizes with the main prize of a £30,000 Nissan Pathfinder.

The Nissan AFF brought adventure films to the mainstream by screening a five-night programme of award-winning adventure films from the world's top adventure film producers. It was the first time some of the films had been shown on the big screen including Long Way Down featuring Ewan McGregor and Charley Boorman.

Said Sarah: “I have never won anything. Even my husband didn’t believe me at first. Given we have two year old twins, the Pathfinder is a joy to have, especially not having to bend down to get them in and out of their seats.”

Said John Parslow, Nissan 4x4 brand manager: “We’re delighted that Sarah has won the Pathfinder and we’re certain she’ll enjoy driving it. Based on the popularity of the Nissan Adventure Film Festival last year, we look forward to bringing the event back later this year.”

The Nissan Adventure Film Festival will be returning in 2007 so watch out for more news coming soon.