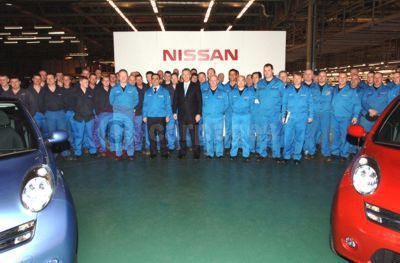 Since production began in 1986, more than 4.1 million cars have rolled off the line. Around 75% of the plant’s production has been exported to more than 45 markets around the world. Nissan has been the biggest exporter of cars from the UK for the last six consecutive years.

Tony Blair paid tribute to the Nissan workforce for demonstrating that the UK manufacturing industry can compete on the global stage. He also congratulated staff on the successful launch of their newest model, the NOTE.

The NOTE compact family car began production in January, with already more than 18,000 units produced. Nissan is targeting annual sales of around 90,000 units, 80% of which will be for export.

Tony Blair said: “Last time I visited this plant, it was to witness the successful launch of the Nissan Micra. I’m delighted to be here again today to see yet another new model coming off the production line.

“The global car market is extremely challenging, and I applaud everyone here for proving that the UK manufacturing sector has the ability to compete at the very highest level.”

The NOTE joins the Micra, Micra C+C (launched in November 2005), Almera and Primera as the fifth model being built at Sunderland. From December 2006, an all-new crossover vehicle based on the QASHQAI concept, will also be produced at the factory.

The introduction of the new crossover will complete one of the busiest periods in the Sunderland plant’s 22-year history. By December, the 4,400-strong workforce will have achieved three new product launches in just 16 months.

In addition to creating 400 new jobs, these three new models safeguard a further 2,000 jobs at the plant, as well as many more working for Nissan’s supply base.

Representing over £221 million of direct investment at the plant, the new models will give Sunderland the potential - depending on market conditions - to produce around 400,000 units a year by 2007. In 2005, the plant produced 315,000 units.

“I am very proud of the achievements of the Sunderland workforce, which time and again has demonstrated its commitment to hard work, quality and productivity,” said Carlos Ghosn. “The workforce at Sunderland has fully justified the £2.3 billion that has been invested in the plant since 1984, but the challenge to everyone in the car industry is continuous,” continued Ghosn.

In Europe, Nissan employs approximately 12,000 people in its design, research and development, manufacturing, logistics, and sales and marketing operations. Last year, the company produced a total of 508,901 vehicles in its British and Spanish plants and sold 540,954 vehicles in Europe. Nissan Europe’s headquarters is based in Trappes (Paris), France.

Nissan Note Images may not be UK specification cars. Colours and exterior and/or interior elements may differ from actual models.