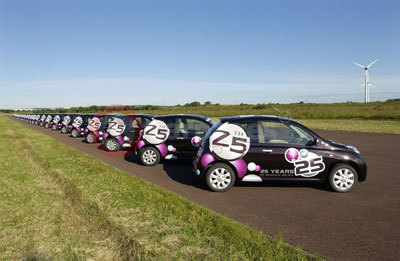 Nissan has celebrated the 25th anniversary of its iconic Micra with a motorcade of 25 special edition models, travelling from the Nissan factory in Sunderland to ExCeL in London.  The motorcade started at 09.00-hrs on the 21st July at the British plant where the Micra has been built for the past 16 years, supplying the UK and European markets, plus 44 countries around the world.

The Micra motorcade will travel on A-roads and motorways as the special edition Micra 25s drive 300 miles to the London exhibition centre, venue of the British International Motor Show, where the Micra 25 will make its UK public debut tomorrow.

To mark 25 years of its iconic small car, Nissan is producing the special edition ‘Micra 25’ which sports a unique ‘Night Shade’ metallic black exterior paint and sophisticated ‘Satin’ effect door handles, hinting that this little car has grown up.  Micra 25 features a host of equipment, especially appealing to younger drivers, including an iPod connection, electric windows and air-conditioning.  Although the Micra celebrates its 25th birthday today, it will always be young at heart!

Covered with brightly coloured 25th anniversary decals, each Micra 25 in today’s motorcade features a single white letter on the roof, which – when the parade is viewed from above – reads ‘Micra 25 at British Motor Show’.

Among the drivers in the cavalcade are staff from the factory who have been part of the Nissan Micra’s success story.  Keith Barkley has worked at the Sunderland plant for 19 years.  Before setting off from the factory this morning, he said: “It is a real honour to take part in Micra’s 25th anniversary celebrations.  My wife and I are looking forward to seeing how the new special edition model performs on such a long journey.  I’m sure it will live up to Micra’s great reputation, especially if it’s one I have helped to build!”

A British manufacturing and export success

The Nissan Micra first went into production in Japan in 1983.  Sales of the small car boomed during its first year and Nissan quickly recognised its strong appeal to UK and European motorists.  It was no surprise that production was moved to Britain in 1992 with the launch of the second generation model.

Thanks to the superior quality and productivity of the Sunderland workers, demand for the Micra went from strength to strength, which meant a second assembly line was added a few months after UK production began, and in 1998 the one millionth model was built.  To date 2.2 million Micras have been manufactured in Sunderland.

The face of the Micra has changed considerably since its early days.  Originally built with conservative square styling, the first generation Micra was available as a three-door model with a 1.0-litre engine.  British drivers appreciated having a small run-around that was ultra-reliable.  Later, in 1989, Micra received a face-lift, consisting of a new look grille, headlamps, deeper bumpers and a new 1.2-litre engine.

Although the first generation model finished production in 1992, a survey by British automotive magazine, Auto Express, 14 years later in 2006, showed that a remarkable 30 per cent of the 340,000 Micras built (96,000) were still on the road.

When production at the Sunderland plant kicked off with the second generation Micra, this model received an entirely new rounded body that appealed to younger drivers.  The new Micra offered two engines sizes (1.0 and 1.3-litre), plus a host of equipment and safety features not normally available on a small car at that time.  The British ‘love affair’ with Micra continued and the chic city car later won the European Car of the Year Award in 1993.

Today’s Micra was first introduced in 2002 and its distinctive bold rounded features and spacious interior quickly increased its popularity around the globe.  Within 20 months of production, 250,000 units were exported to 44 markets outside the UK.