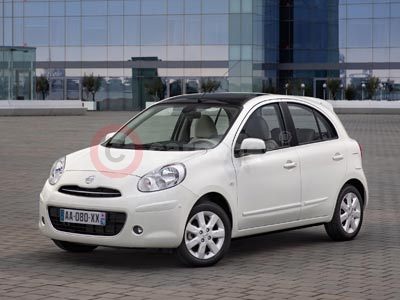 Nissan's focus on reducing emissions is not just restricted to creating electric vehicles such as the award-winning Nissan LEAF. The company now introduces a new petrol engine which produces just 95g/km of CO2 making it one of the lowest in the world today.

Known as the DIG-S, the engine is a direct injection unit with a supercharger - hence the car's name: Direct Injection Gasoline-Supercharger. It delivers sparkling performance, frugal economy and exceptionally low emissions. It has been designed to meet and exceed the everyday driving demands of the modern world and is the ideal partner for Nissan Micra, Nissan's small city car.

Technical innovation has been packed into the engine. The DIG-S uses the Miller cycle and direct petrol injection to raise the compression ratio to 13 to 1 for greater combustion efficiency and a supercharger for instant throttle response and added power. As well as delivering ultra low CO2 emissions, the lightweight, low-friction 1,198cc three-cylinder unit produces the power expected from a conventional 1.5-litre four-cylinder engine.

The results are spectacular. The DIG-S engine produces 72kW (98PS) and 142Nm, while CO2 emissions are 95g/km for the manual version and 115 g/km for the CVT version. Maximum speed is 112mph for manual. Combined cycle fuel economy figures for the manual Visia version is 68.9mpg.

By minimising heat, friction and pumping losses as much a possible, Nissan's engineers have created an engine that sets the standard for the rest of the industry. Its three-cylinder configuration gives many benefits including less weight and further reductions in friction loss, thanks to having fewer moving parts. Further gains are made thanks to the adoption of advanced engine management systems with Start/Stop and energy regeneration.

"Ultra low emissions with no compromise when it comes to drivability means the Micra DIG-S sets new standards for the current generation of city cars. No other petrol-powered compact hatchback can beat its overall efficiency... and it is more than a match for an equivalent diesel," said Pierre Loing, Vice President Product Strategy and Planning, Nissan International SA.

"We have been able to achieve this ultra low CO2 figure in a cost effective package and without the complication of particulate filters needed to clean up diesel engine emissions and which are not entirely compatible with a car that spends much of its life in the city."

Low running costs are guaranteed not just by the excellent fuel economy but also thanks to tax concessions based on its emissions and to lower servicing bills from the smaller engine. For example, cars producing less than 100g/km of CO2 attract no annual road tax and are exempt from London's daily congestion charge.

This remarkable engine which adds to Nissan's PURE DRIVE range, makes sub 100g/km emissions performance easily accessible while low cost of ownership make it a serious alternative to a comparable diesel, with the added bonus of greater refinement.

In common with industry practice, these headline figures refer to the entry-level version as higher levels of equipment found in plusher models mean extra weight which affects emissions performance. But such is the efficiency of the unit that the most popular version, Acenta, also promises an outstanding CO2 figure: just 99g/km in manual form.

The DIG-S will be given its European debut at the Geneva Motor Show (3rd-13th March 2011) with sales starting over the summer.