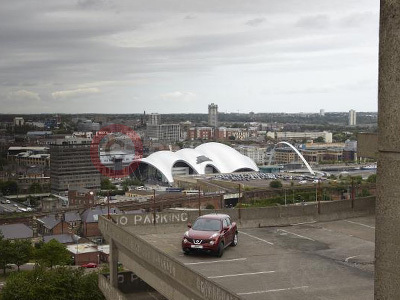 The soon to be launched Nissan Juke helped create history and signal the beginning of a new era in Gateshead, as it became the last ever car to burn rubber on Gateshead's famous 'Get Carter' car park.

Gateshead Council and Spenhill, the regeneration subsidiary of Tesco, invited Nissan to showcase its latest model, which has been designed in the UK and built in Sunderland, to commemorate over 40 years as one of the most iconic but often controversial structures in Gateshead, and indeed the North East.

The iconic structure, which is best known for playing host to Michael Caine in the 1970's gangster flick, 'Get Carter', is due to be demolished after Gateshead Council and Spenhill recently signed a formal agreement to develop a key part of the borough's town centre.

Leader of Gateshead Council, Councillor Mick Henry said, "This structure has dominated Gateshead Town Centre since 1969 and been a constant talking point. Today is the last time any car will drive on it, so it seems fitting that a model made in our region be involved in bidding farewell. It is the end of an era and we anticipate that travel to and around the new development in the town centre will change beyond recognition from what we built here in the 1960s."

Nissan has invited Gateshead born employee Nigel Sidney from the Sunderland plant for the last 23 years to be the last ever person to drive around the car park. Nigel has been an avid fan of the film since the 1970s and has seen the film numerous times. He said, "There is great affection for the film in the North East. The building has had a huge impact on the area and has been the subject of many debates - so to be the last person ever to drive around the location is certainly something that will go down in history."

The car park was designed in 1962 when Brutalism was at the cutting edge of architecture.  However, by the time it opened on 2 August 1969, free of charge, interest in the movement had already begun to decline. It cost £200k and was designed by post war architect, Owen Luder, who was subsequently RIBA President and is an example of Brutalist architecture – raw exposed concrete defining the character of the building and its’ exterior.

The car park did however become a part of modern film folklore when it was used in the 1971 Get Carter film and is commonly known as the ‘Get Carter Car Park’ – the place where Jack Carter, played by Michael Caine, threw local businessman Cliff Brumby off one of the top level.

Doug Wilson, Corporate Affairs Manager for Spenhill said, “We are delighted that we are moving forward with the redevelopment and it does seem appropriate that the Duke signals the end for the structure and a new beginning for car production in the North East."

Nissan Juke Images may not be UK specification cars. Colours and exterior and/or interior elements may differ from actual models.