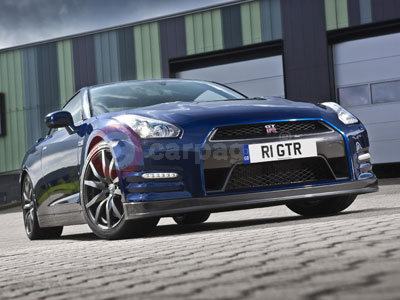 Sports car fans heading for the PistonHeads Performance Car show, held within the Autosport International event, in Birmingham this month are set for a feast of Nissan horsepower.

The first treat is the opportunity to see the awesome new Nissan GT-R. Revised for 2011, it now packs a 530PS punch and produces 612Nm of torque. This is enough to power the supercar to 0-62mph in 3.0 seconds, making it one of the fastest cars in the world.

Besides more power, the enhanced Nissan GT-R is distinguishable by its new wheel design, LED daytime running lights, larger front brakes, improved air intakes, red engine cover and a revised interior. It is available only in one grade known simply as the Nissan GT-R but with two interior choices - Recaro black full leather seats with red flashes or premium with a leather and Alcantara seat trim - both available at no extra cost. The car on display at the show will have a Recaro Black interior with the new exterior colour for 2011, Daytona blue.

Sitting alongside the Nissan GT-R will be the latest versions of the Nissan 370Z Coupe and Roadster, both celebrating the 40th year of Nissan 'Z' cars in the UK. Producing 328PS from their 3.7-litre V6 engines, they have come a long way from the original Nissan 240Z which was first officially imported into the UK in August 1971 with a 150PS powerplant. Much of this iconic car's character has been carried over to the latest incarnation Nissan 370Z though, including its front engine, rear wheel drive layout and its two seat driving experience. Even elements of the original styling can be seen in the bonnet and roof lines.

Show visitors going beyond Nissan's own stand will be able to spot some even more extreme Nissans. Performance Tuners Sumo Power will be showing off their stunning FIA GT1 championship race winning GT-R which recently picked up the RAC tourist trophy. The second Nissan GT-R race car will be strutting its stuff in the 'Fifth Gear Live Action Arena' where spectators will be able to see, hear and smell the car in action. Drivers of both cars will be available for autographs at various times over the four days of the show.

Speed merchants still hungry for more power should seek out the most powerful car to ever wear the Nissan badge; John Bradshaw's Z drag car puts out a whopping 2,000hp from an engine which uses the same V6 engine block as a standard 370Z. Dressed in its new livery of red and silver it can be seen at the show in hall 7 on stand number 7400.