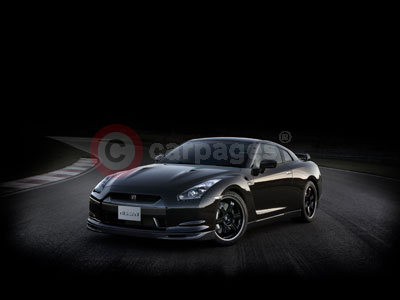 Nissan in Europe will sell just 40 examples of the ultimate iteration of the Nissan GT-R supercar, the SpecV. Orders are now being taken at Nissan High Performance Centres (NHPCs) across Europe and will close on 22nd January 2010.

The limited run of 40 examples in Europe reflects that 2009 is the 40th anniversary of the launch of the first Nissan to wear the GT-R badge. Also reflecting its exclusivity, and in recognition of the car's indelible link with the Nordschleife circuit in Germany, the Nissan GT-R SpecV is only being displayed in Europe at the new Nissan Sports showroom in the new Nurburgring complex which was opened in July 2009.

Developed as the ultimate iteration of the Nissan GT-R, the SpecV model builds on the original GT-R's product concept by changing and enhancing key components that help deliver the SpecV's philosophy of being for skilled drivers who are 'at one' with their vehicle.

Incorporating all of the product enhancements recently announced for the standard Nissan GT-R, these changes are based around the SpecV's ability (in the right conditions and environment) to brake later and harder, corner faster and accelerate sooner.

Although maximum horsepower output remains unchanged, engine performance is enhanced with a new high gear boost control device, which briefly increases boost of the twin turbochargers for greater torque in the intermediate-to-high speed ranges to provide greater in-gear acceleration. Braking and cornering performance is improved by the fitting of a carbon ceramic brake system jointly developed by Nissan and Brembo, revised springs and fixed-rate dampers. Other performance modifications include a titanium exhaust system.

Inside, the Nissan GT-R SpecV is offered uniquely as a two-seater (non-SpecV GT-R models also include two-place rear seat) with bespoke Recaro carbon fibre bucket seats trimmed only in Black leather, while carbon fibre is also used for the surround of the rear Bose speakers, instrument panel and other trim areas.

In addition to a revised paint colour line-up (Ultimate Metal Silver and Titanium are not available) the Nissan GT-R SpecV is available in optional Ultimate Black Opal (RP), a unique chromaflair paint for this version.

The Nissan GT-R SpecV - due to its extraordinary level of technological performance and to the elevated competence of its reference customers - will be only available through one Nissan High Performance Centre in the UK - Middlehurst Motorsport GT-R, St Helens, Merseyside.

Commenting on the introduction of the Nissan GT-R SpecV in Europe, Vincent Wijnen, Nissan's European Vice President for Marketing, said: "For a very small number of sports car fanatics, the GT-R is not enough. They have to own the ultimate version and to cater for that desire, we will sell just 40 examples of SpecV in Europe. Its combination of lighter weight, more focused driving dynamics and exclusivity will guarantee SpecV's place as one of the most desirable cars anywhere in the world."