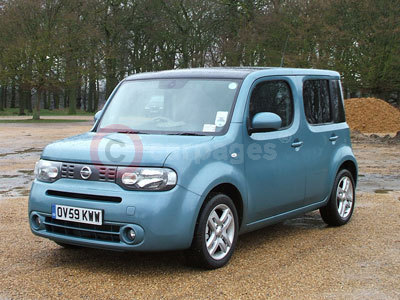 I'm not one for text-speak but when I saw the Nissan Cube for the first time there was an utterance of OMG! Now let's not beat around the bush, here, if there was an Ugly Car of the Year award, the Nissan Cube would be the odds on winner, if the 'Ugly Tree' comments were anything to go by.

If the odd-looking exterior is out of the ordinary, just wait until you see the inside and just what is that circle of shag-pile carpet on top of the dash all about. It goes way beyond quirky.

But wait a minute…it isn't that bad. No, really.

Although the Nissan Cube went on sale in the UK in January 2010 - the UK market being the first in Europe - the car has been on sale in Japan for seven years. The current squared-off shape has been around since 2002 and is a development of a more conventional looking car.

So, why the UK? It might have something to do with the fact that the London Design Museum is a fan, labelling the Nissan Cube as one of the 50 cars that changed the world. Nissan's designers have other ideas and are said to describe it as a 'bulldog in sunglasses' because of its wide stance and the curious shape of the headlights.

Now before I attempt a more mundane description of something that clearly doesn't fall into that category, proof that the Nissan Cube does have an appeal can be seen in the latest UK sales figures; 95 in January and 18 in March 2010. The numbers are clearly not those of a mainstream car but then the elitists out there will enjoy the fact that there is unlikely to be another one in the same street. In fact it is a little like having your own personal concept car, which can be made even more unique with the help of some of the optional extras, such as tattoo decals.

From photos of the Nissan Cube it is hard to get a sense of scale but when seen in the metal, it is likely to be larger than you imagined. Now, in its third generation, the 'all-new' Nissan Cube is a little softer than the previous model and, according to the information that came with the car, inspiration came from varied sources from the staff cafeteria to Jennifer Lopez and it doesn't take a genius to guess which part that is.

Not that we in the UK would know, but the latest version is wider and larger than its predecessor and a little taller, too. In real terms the new Nissan Cube is 3,980mm in length, 1,680 tall and 1,695mm wide. This is shorter than the Nissan Note, which shares the same platform but tall enough inside, to keep your top hat on. And of course, the similarity in height and width measurements is what gives the Nissan Cube its name.

Nissan Cube Images may not be UK specification cars. Colours and exterior and/or interior elements may differ from actual models.