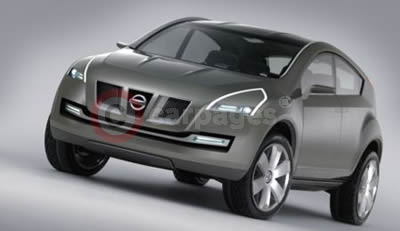 Nissan announced today that its new compact-crossover vehicle will be built at its car plant in Sunderland, UK from 2007.

The new car, codenamed P32L, is based on the highly acclaimed QASHQAI concept car unveiled at the Geneva Motor Show almost a year ago, the first model to be styled at Nissan Design Europe in Paddington, London. It was developed at Nissan Technical Centre Europe in Bedfordshire, UK.

This crossover vehicle, part people-carrier, part hatchback with available all-wheel drive, is the second new model to be announced at Nissan Motor Manufacturing UK Ltd (NMUK) in just six months, following confirmation that a production model based on the Tone show car, unveiled at the Paris Motor Show last autumn will go into production in January 2006.

The announcement was made by Sunderland plant manager Colin Dodge, Senior Vice President, Manufacturing, Nissan Europe, at a press conference in Sunderland, attended by Patricia Hewitt, the UK’s Secretary of State for Trade and Industry.

The new model further safeguards around 1,000 jobs at Sunderland and will create an additional 200 posts following close after the mini-MPV announcement, and represents a total UK investment of around £223m, including £5m of Regional Selective Assistance awarded by the Department of Trade and Industry. During the press conference, Hewitt welcomed Nissan’s news of the continuing growth for the company in the United Kingdom.

The new model will go into production in December 2006 and on sale beginning in 2007.

Initial production volume will be around 130,000 units per year. This would increase the plant’s total annual volume to around 400,000 units - strengthening Sunderland’s position as the UK’s biggest car plant.

During the event Nissan also unveiled its new Navara Crew Cab pick-up and the Zaroot concept SUV which will be unveiled to the public at the Geneva Motor Show on 1 March. Nissan also showed a production-ready version of its Pathfinder SUV which is due to go on sale in March.

As well as the Tone, the P32L will join Nissan’s Micra, Micra C+C and the Primera on the Sunderland production lines which build around 320,000 vehicles a year and is recognised as Europe’s most efficient car factory.

“Today’s announcement is a tremendous vote of confidence in our workforce,” said Dodge. “Production of the P32L is a good decision for the company given our employees’ track record of handling the complexities of manufacturing multiple vehicles. It will be a challenge to integrate this all-new model into our product mix, along with our upcoming model changes. But this is the sort of challenge any car plant would welcome and I know the workforce will be looking forward to next year and the start of production.”

Nissan believes the new model will fill a growing niche in the car market for vehicles designed to live a dual life. QASHQAI, pronounced “Cash-Ky” is aimed at young professional people who enjoy living and working in the city during the week but who want to escape at the weekend.

Nissan Design Europe (NDE), which was responsible for designing QASHQAI, is one of the company’s design ‘think-tanks’ dedicated to developing future generations of advanced designs for European markets. It combines the sleek lines of a sporting hatchback with the attitude and authenticity of a serious 4x4.

NMUK currently employs around 4,100 workers, capable of producing up to 500,000 units per year based on a three-shift system.