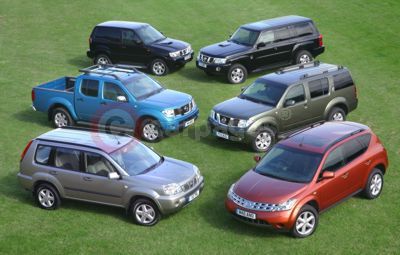 Nissan is the 2006 4x4 Maker of the Year. At least according to 4x4 & MPV Driver magazine it is. And few should disagree given Nissan’s range of six four-wheel drives, soon to become seven, which caters for the widest variety of customers’ 4x4 needs and even includes 4x4s that aren’t.

Nissan’s 4x4 range is split into three types. There are the sport utility vehicles, or SUVs, that are aimed at families who want up to seven seat versatility with the reassurance of constant mobility whatever the weather or terrain. Then there are the crossovers that are more biased to road use and only engage four-wheel drive when the conditions demand it. And finally there are the traditional mud-pluggers for whom no job or obstacle, short of crossing the English Channel, is too much.

As the editor of 4x4 & MPV Driver, Bob Murray, puts it: "Nissan has gone 4x4 crazy and now boasts models to suit just about everyone from those who don't really need a 4x4 to those whose lives depend on one. It's an intelligent, sexy, capable and appealing range. But more than anything all the models represent great value for money." Sexy, Nissan? Oh yes - this company is going through a major SHIFT_. And 4x4s are a major part of it.

Most successful is the X-TRAIL , Nissan’s multi award winning compact SUV. It’s priced from £16,500 to £24,600 and offers a choice of four equipment levels and three engines including an economical, modern diesel. Unusually the X-TRAIL also offers a choice of electronic, fast reacting ALL-MODE 4x4 that engages all wheels when conditions demand reducing fuel consumption and minimising emissions, or unusually a front-wheel drive only X-TRAIL that offers all the clever design and space of the four-wheel drive X-TRAIL while confusing the anti-4x4 fraternity. But then every X-TRAIL has a better pedestrian impact rating than many ordinary cars, dimensions little bigger than a family hatchback and 39.2 mpg fuel economy with the dCi engine that most are ordered with. Other pluses include a commanding driving position, wipe-clean cargo bay, a ski hatch, air conditioned cool boxes, as well as safety features such as anti-lock brakes with electronic brakeforce distribution and brake assist. Every X-TRAIL also has ISOFIX child seat mounting points. And in most versions, a glass sunroof so large that baby can watch the clouds pass by above rather than mum and dad’s heads playing Punch and Judy.

If your family is XL sized both in number and literally, Nissan offers the Pathfinder SUV. It’s as thoughtfully designed as the X-TRAIL but offers five quick folding rear seats in addition to the front pair adding up to 64 people-versus-luggage permutations. The Pathfinder employs the X-TRAIL’s ALL MODE 4x4 system with the addition of electronic stability program for increased safety. In fact, this driveline coupled with a lower centre of gravity than its top heavy rivals makes the Pathfinder an extremely dexterous 4x4. And at 4.74m it’s actually shorter than a Vauxhall Vectra Estate that seats two less.

The Pathfinder is also surprisingly economical for so versatile a vehicle - fitted with Nissan’s 2.5-litre dCi engine, it returns 31.4 mpg on the combined cycle. The 4.0-litre V6 petrol isn’t so parsimonious but then it will speed to 62mph in 8.9 seconds - that’s fast for a seven seater let alone a 4x4 one. Standard equipment is luxury league with items like a colour rear view camera, MP3 compatability, Bluetooth phone compatibility, xenon headlamps, and DVD satellite navigation all available. But we’ll leave the summary to 4x4 & MPV Driver: "Nissan’s Discovery rival has just as much presence and similar mud-plugging ability but at a price more of us can afford." And what is that price? The range starts at £24,500 rising to the totally equipped 4.0V6 T-spec automatic at £33,960. Rather less than the equivalent Land Rover.

The Pathfinder has recently spawned a range of mud-plugging King and Double Cab pick-ups called the Navara. It’s the most powerful vehicle in its class with 174PS and the Navara boasts the biggest carrying capacity, too. Unusually for what is essentially a workhorse, the Navara is available with many of the luxury features of its SUV sister. Which even includes electrically adjustable and heated leather seats. The Navara will carry over a tonne and tow up to 2.7 tonnes and is set to be the UK’s favourite pick-up if journalist opinion has anything to do with it.

If towing is your game, look no further than the Patrol. Nissan’s iconic 4x4 has been in production for over 50 years and the current incarnation is the most capable and comfortable yet. Loved by peacekeeping forces for its indestructibility, the Patrol will tow up to 3.5 tonnes. That’s practically a house. And nothing else offers as much metal for the money - the 3.0-litre diesel fuelled Patrol is priced from £25,750. Rather more compact but almost as capable on the rough stuff is the venerable Terrano which is available in three-door or Van forms priced from £14,295 ex-VAT. Given their credentials, it’s no wonder that the Patrol and Terrano are rarely seen down town being much happier mucking about up country.

And then there’s the crossover Murano. It looks unlike anything else on the road and offers unbeatable value for money so much so that 4x4 & MPV Driver awarded it its 4x4 Deal of the Year award. There’s only one Murano powered by a version of the 350Z Coupe’s 3.5-litre V6 engine coupled with continuously variable transmission (CVT) for smooth progress with just the one option - metallic paint. Everything else is included. So that includes ALL-MODE 4x4 ensuring the Murano remains front-wheel drive unless more traction is required, electric leather seats, 6CD autochanger, DVD satellite navigation system, 18" alloy wheels, xenon headlamps, an electric glass sunroof, reclining front and rear seats, colour rear view camera … the list goes on and on. The price is £29,995 - £1000s less than its rivals equipped to the same standard. Which leaves the styling. This being a subjective subject, let’s get the opinion of 4x4 & MPV Driver: "Looking like a cross between a sports coupe and a 4x4, the Murano provides the ultimate wow factor - and the perfect antidote to the anonymity of some rivals." Head turning, then.

4x4 number seven will be revealed in less than a year’s time. Nissan’s most compact 4x4 yet has been designed in London, is being engineered in Bedfordshire and will be built in Sunderland. Rather fitting for the UK’s 4x4 Maker of the Year.

Nissan X-Trail Images may not be UK specification cars. Colours and exterior and/or interior elements may differ from actual models.