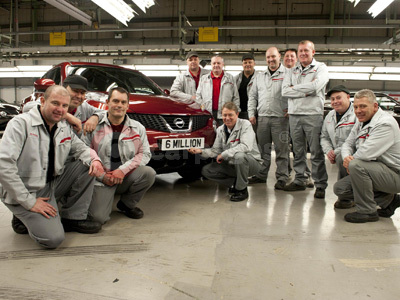 Nissan Sunderland Plant is celebrating a record year of production, cementing its status as the UK's number one car producer.

This record year was driven by the continuing success of the models produced by Nissan Sunderland Plant, in particular the Nissan QASHQAI. A third shift was added to the QASHQAI line in May 2010, boosting annual production of the Nissan QASHQAI and Nissan QASHQAI+2 to 271,188, up from 198,841 in 2009 and 224,989 in 2008.

Following the start of production in August there were 44,622 Nissan Jukes made at the plant. Earlier in the year Nissan Sunderland Plant also produced 54,580 Nissan Micras, the last of which was made in July before production moved to India after 18 years.

The Nissan Note, which shares Line 2 at Sunderland Plant with the Nissan Juke, also performed strongly in 2010 with production increasing year-on-year from 50,880 to 52,872.

Nissan's Vice President for Manufacturing in the UK, Kevin Fitzpatrick, commented: "2010 was a landmark year for the plant and represents a superb achievement by our workforce.

"This performance also reflects the popularity of the models we are producing in Sunderland, especially the Nissan QASHQAI and the new Nissan Juke, which have both been designed, engineered and built in the UK.

"By focusing on cost competitiveness, quality and being responsive to fluctuating customer demand, we have experienced significant growth in our operation where others have declined. This winning formula will be the key to securing future new products and continued growth."

The 2010 calendar year also saw Nissan announce that the 100% electric Nissan LEAF, the new European Car of the Year, would be manufactured at Sunderland from 2013. Construction work is progressing well on the new battery plant at Sunderland, which will produce lithium-ion batteries for the Nissan LEAF. The first UK customers will receive their Nissan LEAF in the coming weeks, having benefited from the £5,000 UK Government Plug-In Car Grant.