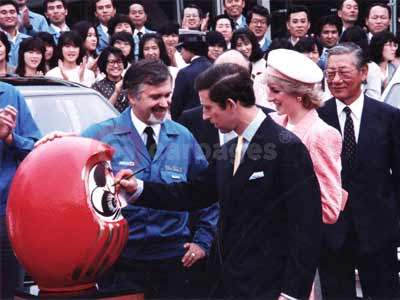 The Nissan Sunderland Plant is celebrating the 25th anniversary of the official opening on 8th September 1986.

The opening ceremony was performed by then-Prime Minister, Lady Thatcher, who also painted the second eye on a traditional Japanese 'daruma' doll to confirm the successful opening of the plant. This followed an event where the first eye was painted by Prince Charles and Princess Diana during a visit to Nissan's Zama Plant in Japan.

More than 6.2 million vehicles have been manufactured at Nissan, covering 12 different models including as the Bluebird, Primera, Micra, Almera, Note, QASHQAI and Juke.

"I celebrate this milestone with the Nissan Sunderland Plant and commend the significant achievements of the plant and its employees over the past 25 years," said Carlos Ghosn, Chairman and Chief Executive Officer of Nissan Motor Co.

"As the UK's largest car plant, biggest car exporter, and soon battery plant - with battery production for the Nissan LEAF planned for next year - Sunderland is a beacon of Nissan's exemplary leadership in manufacture, management and technology, which define a global car company in the 21st century."

Prime Minister David Cameron said: "I welcome Nissan's continued investment in the UK, and the important role Nissan is playing in helping to rebalance our economy.

"With the design, development and manufacture of their new generation QASHQAI all taking place in the UK, Nissan has restated its confidence in the skills of its British workforce and in the UK's manufacturing sector."

A ceremony will be held at the Nissan Sunderland Plant to mark the milestone, which will see a time capsule buried on the site, a recreation of the ceremony held when construction of the plant begun. The new time capsule updates artifacts placed in the original capsule, including a model Nissan QASHQAI, a telephone directory, newspapers from today, a Sunderland AFC shirt and items donated by regional partners such as the North East Chamber of Commerce, the CBI, Sunderland Council and Gateshead College.

As well as celebrating a record year for production in 2011, the six millionth car was produced in january, shortly before the 100% Nissan LEAF arrived in the UK in February. In June, Carlos Gosn, Nissan's Chief Executive, visited the UK to announce the next generation Nissan QASHQAI will be designed, engineered and manufactured in the UK, just as the QASHQAI became the fastest UK-made car to reach one million units.

Staff are now preparing to start production at the new lithium ion plant in the New Year, before Nissan LEAF production begins in 2013.