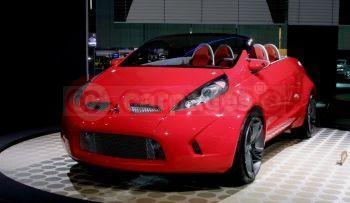 To say he was surprised that very few of the designers had met previously would be an understatement. All were called to a design conference in Japan and he has now instigated job rotation with designers spending time in other studios to exchange know-how and absorb different cultures. One of the first results of this is the Tarmac Spyder concept, unveiled at the North American Auto Show in Detroit. It was penned by the same designer who produced the CZ-3 Tarmac unveiled at the 2001 Tokyo show and seen in Europe but not in the USA.

Boulay has also introduced competitive tendering among the studios. "What we have to do is remember that we are a Japanese brand and not a pseudo-US or European brand," he says.

"Good Japanese products sell well worldwide – you have only to look at Sony to see that."

The dilemma that Frenchman Boulay faced was to encourage each designer (there are 250 of them in the seven studios) to find their own way -- "to open their eyes" as Boulay pits it, without forgetting MMC’s roots. "Their thinking was too narrow and we need to change that."

One of his goals is to make sure that the studios are better linked so that there is 24-hour input around the planet.

"My vision is to have each studio playing a role in every product and for those products to be constantly updated.

Developing vehicles for only one market is too expensive, says Boulay. "Platform and component sharing across the group should make future developments easier and more cost effective."

The Tarmac Spyder is a 2+2 powered by a 315 bhp 2.0 litre turbocharged four cylinder engine.

The Tarmac Spyder has a detachable hard top and the bonnet opens forward.