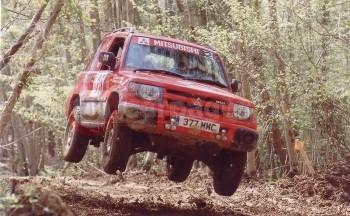 Goodyear British Off Road Championship - Round 3

The Goodyear British off Road Championship moves into Scotland for round three next weekend 27th & 28th July, where Colin Read, driving the works entered Mitsubishi Shogun Pinin will be aiming to increase his current Standard Production Category lead.

Following an outstanding performance in Kent, on round one in April, when Read convincingly won the class and finished 14th overall, the Great Bedwyn driver aimed to consolidate his championship standings in round two last month. However, whilst leading the class, the Pinin admirably coping with the treacherous conditions in the Welsh Hills, the non-standard, competition sump guard, suddenly split and dug into the ground, causing the car to roll at high speed.

Although Read and his co-driver, Chris Eade, continued for a few more miles, they eventually had no choice but to retire. Fortunately, as they had completed much of the event by that time, they were credited with a well deserved second in class.

Since then, the team have restored the bright red 1800 cc Pinin back to its former glory in readiness for round three, which marks the half way point in the series.

Taking place at Athron Hall, in the Ochil Hills overlooking Loch Leven, the event is destined to be a fast and highly competitive affair, much of the course featuring open moorland and farm tracks. Organisers report that the going will be less rough than on previous events and Read hopes that the high speed, technical sections will give his Mitsubishi a distinct advantage:

‘So far this season, we have shown that a relatively standard Shogun Pinin can be a match for many of the powerful hybrid machines that are specifically built for off road racing², said Read. ³The conditions in the last round were particularly bad, so I am confident we will have an advantage on the faster and more open sections of the course.²