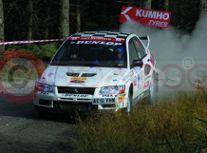 Jeremy Easson and co-driver Nigel Gardner should have no problem in becoming the 2002 Mitsubishi Ralliart Evolution Challenge Champions this Saturday (19th October), as all they have to do is cross the start line of the Bulldog Rally, the last round in this year's series, to collect the seven bonus points awarded for entering all seven rounds.

This allocation of points will make Easson/Gardner uncatchable, whatever happens on the event. Having taken four victories out of the six rounds so far, driving their Evo VII they have led the Challenge for most of the season, only Mark I'Anson and Graeme Walker briefly edging ahead following the fourth round, when the series heir apparents recorded their only non-finish.

However, the fight for second is still far from over, with Anthony Willmington and Andrew White just one point in front of I'Anson/Walker, following a season-long battle between these two Evo VI mounted crews. Graham Presswell and Phil Cottam hold a comfortable fourth place but will mathematically be unable to grab a position on the end-of-year podium this weekend.

Organisers of the series are pleased to report that a new and high profile first prize for the winners of this year's Challenge will be announced later this week.

This Bulldog Rally also forms the seventh and final round of the Kumho National Rally Championship and takes place in the much-rallied forests of mid-Wales. Crews will start from Newtown on Saturday morning for eight stages and 75 competive miles before finishing in Shrewsbury in the evening.

10 of the 15 registered Evo Challenge crews will be competing. They are as follows (listed in current series order):