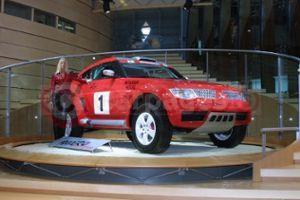 By Anthony Lewis and Chris Wright at the Paris motor show

Mitsubishi Motors will transform the image of its passenger cars with stronger designs that put the passion back into the brand, said Steven Torok, head of international car operations for MMC. That passion will be reinforced by a total commitment to motor sport. "We’re not giving up any motor sport activities and we will be making fairly significant announcements later this year," said Mr Torok, speaking at the Paris motor show today where the Pajero Evolution made its world debut.

Mitsubishi’s worldwide motor sport activities had been thoroughly reviewed, he said. "It is a core component of our business and we will stay committed to it," said Mr Torok.

This sporting commitment would be carried over to passenger cars with performance a key element across the range.

"We have a strong 4x4 and SUV image, but our passenger cars have been bland," said Mr Torok. "We need to give all our vehicles the same strong image."

This is a particular challenge in Europe. "In southern Europe we have strong 4x4 image while in places like Germany we have a stronger passenger car image," said Stefan Jacoby, president of Mitsubishi Motors Europe. He said the company was close to redefining its brand image and it was essential to harmonise its image across Europe. This would reflect the global direction of Mitsubishi which was one of quality and refinement backed by stronger designs. The first tangible results of this repositioning of its passenger cars will be seen with the launch of the new Colt in 2004. This will be built at the company’s NedCar facility in Holland with engines supplied from a new plant Germany near Leipzig. The 1.1, 1.3 and 1.5 litre engines have been designed by Mitsubishi and built to Mitsubishi’s specifications using DaimlerChrysler production technology. "We couldn’t have built the engine plant on our own because we don’t have the volumes to justify it - but the alliance with DaimlerChrysler gives us that volume," said Mr Torok. "It means that around the world we can have a much wider range of products." DaimlerChrysler owns 37.4% of Mitsubishi Motors.

Although sales across Western Europe are down by 10% in the first eight months of this year this was in line with expectations, said Mr Jacoby. "We have lost three models from our line-up which between them accounted for the 10,000 sales we are down by."

"I’m extremely confident. This is a very competent and competitive car," he said.

New Colt will be launched as a five door, described by Mr Jacoby as a cross between a hatchback and a mini-MPV. "We will convince people that this is the car for them by being different," he said.

A sporty three-door model will follow shortly after the launch of the five-door.