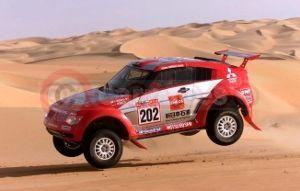 Fontenay And Biasion Make It A Mitsubishi 1-2-3

LIWA (UAE): Frenchman Stephane Peterhansel won his second successive stage of the UAE Malboro Desert Challenge on Thursday and moved into a near 38-minute outright lead at the wheel of the new Mitsubishi Pajero Evolution.

The six-times former winner of the Paris-Dakar Rally had given the new Pajero Evolution a successful first competitive airing over the special stage from Hameem to the east of Liwa, deep in the desert of the United Arab Emirates on Wednesday, and held the overnight advantage.

He and co-driver Jean-Paul Cottret extended that lead in the searing heat of the section section through the Western Region of the Rub Al-Khali desert in Abu Dhabi.

Peterhansel led over the 404.5 kms second section after a near-faultless performance in the leading Pajero Evolution. This car is the latest Mitsubishi cross country racer which was unveiled at the Paris Motor Show in September, next to the Pajero Evo 2+2 concept car it was derived from.

"Today I really pushed hard. Not flat out, but I gave it a lot more to make a good test. We had some damage to the front right side of the car and the bumper. We hit a dune hard and jolted our necks. No serious problem," said Peterhansel.

Mitsubishi team mates Jean-Pierre Fontenay and Miki Biasion held comfortable second and third places overall in a pair of 2002-specification Pajeros, although Hiroshi Masuoka, who had held second place at the start of the section in Liwa on Thursday morning, dropped down the leaderboard with an overheating transmission.

As for third-placed Biasion, he admitted "It was only my second day in the Pajero, but I am enjoying the challenge. I was stuck today in the dunes for some minutes, but it was not a real problem. I am learning about the car all the time."

Portugal's Carlos Sousa and new French co-driver Henri Magne started the day in seventh place, but lost time with clutch problems in their Mitsubishi L200 Strakar and slipped down the leaderboard. They, like Masuoka, will incur time penalties before the restart on Friday morning.

Friday's penultimate section heads out into the Eastern region of the Rub Al-Khali (Empty Quarter) for a 366 kms competitive stage. The final round of the 2002 FIA World Cup for Cross Country Rallies finishes in Dubai on Saturday afternoon.