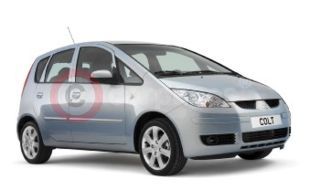 There will be plenty to celebrate for Mitsubishi Motors in Europe in 2004; posting the first increase in sales since 1998, breaking-even a year ahead of schedule, and the celebration of the 30th anniversary of its regional operations. In terms of product, 2004 will also see the introduction of Mitsubishi’s most significant car ever to be launched in Europe, the New Colt.

The New Colt, to be unveiled at the 2004 Geneva Motor Show, is the first vehicle born of the Mitsubishi DaimlerChrysler Alliance. Built in Europe, the New Colt has returned to its roots with a clean-cut design, sharp driving dynamics and clever engineering. Due to go on sale from May onwards across Europe (1st September for the UK), a range of new engines will be available including a 1.1, 1.3, and 1.5 petrol plus a 1.5 diesel unit.

Using the same "One-Motion" design concept, Mitsubishi Motors will also present in Geneva the world premiere of the New Colt CZ3, a proposal for a 3-Door coupé model. Designed under the direction of Olivier Boulay, Head of Mitsubishi Motors Design, Colt CZ3 will demonstrate the depth and breadth of New Colt design, being much more that just a Colt 5-Door minus two doors.

It also fits well within the new Mitsubishi Motors generation, such as new Grandis MPV and Lancer Evolution VIII, where the performance promised through the design, is actually delivered through the drive.

At 3.87 m, New Colt will be the first B-segment Mitsubishi to be sold in Europe. A new entry equipped with all the expected attributes :

Being taller than most hatchbacks, New Colt will offer optimum roominess, but not to the detriment of its design. Like the 2001 CZ2 concept car it was created from, it will be distinguished by its clean-cut lines, which were executed by Mitsubishi Design Europe.

New Colt will also bring sharp dynamics to the equation, with its finely tuned suspension, long wheelbase, wide tracks, standard electronic power-assisted steering and responsive engines, starting with the eager 3-cylinder 75bhp 1.1 litre* (* figures subject to final homologation). As such, New Colt will also return to the roots of the Colt line of which 800,000 units have been sold in Europe since 1978.

Built at Mitsubishi Motors Corporation´s NedCar plant in Born (The Netherlands) alongside the Smart forfour, New Colt will be launched sequentially in Europe from May onwards.