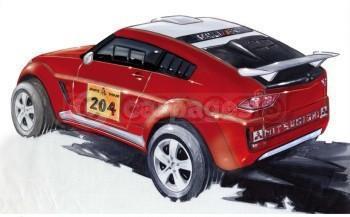 Mitsubishi Motors this week have released a second picture of their Pajero Evo concept rally off roader, which will be revealed at the Paris Motor Show on Thursday 26 September.

The original Pajero/Shogun Evo concept was first shown last September at the Frankfurt Auto Show and then revised in a 2+2 configuration at the Geneva Auto Show in March 2002.

Those two concept versions left motoring enthusiasts asking - when was it going into production - will we ever see it in action?

Mitsubishi Motors has now confirmed it has turned the radical concept into a real life racing project under the code name of " MPR10 ", and it will be Mitsubishi's 2003 cross country race car.

Destiny to reality will make its public debut at the 2002 Paris Motor Show.