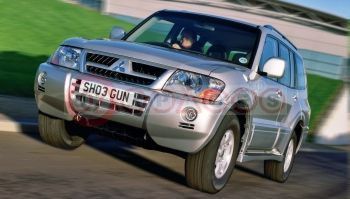 With more emphasis seemingly being paid by consumers in having a distinctive number plate such as 03 for their vehicle, which denotes the year rather than part year such as 53, March could soon take over as the prime month for UK new car sales rather than September.

However March 2003 and the new 03 registration month turns out for the industry overall, Mitsubishi experienced record UK sales last year and registrations to date in 2003 are at an all time high.

The new Shogun range went on sale in January and it is one of only two large 4x4 vehicles on sale in the UK to show an increase in sales so far this year. With a new look, petrol models with reduced prices and no price increases for diesel variants despite up to £1,000 of customer value improvements, the Shogun is an attractive proposition for 03 registration plate customers. Prices start at just £21,995.

Although 1 March will not see any of the new Lancer Evolution VIII models with a 03 plate, as sales begin early in April, advanced orders are conservatively described as very healthy. With prices starting at £26,995 the new 276 bhp Lancer Evolution FQ-280 with its distinctive new looks, 6-speed transmission and active yaw control will sell like ‘hot cakes’. Now the future of the Ralliart brand is black and white having been taken in house by MMC in Japan, there are no grey areas regarding official Evolution VIII models.