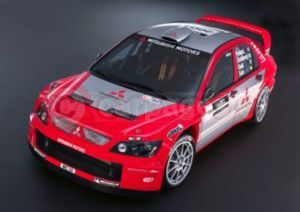 Mitsubishi Motors motor sports subsidiary, MMSP, unveils the car that will spearhead its 2004 FIA World Rally Championship campaign, the Mitsubishi Lancer WRC04. A completely fresh design, the new car forms an integral part of a meticulously conceived long-term plan to build on MMSP’s distinguished record in the World Rally Championship. It will compete on all 16 rounds of the series.

World Rally Car rules demand that the competition car is derived from a family of showroom cars, made in quantities of at least 25,000 per year. The Lancer WRC04 is therefore based on the standard Lancer, but as its dramatic appearance indicates, it has little in common with previous Mitsubishi World Rally Cars. Once again, it draws on Mitsubishi Motors’ worldwide resources, combining Japanese and European capabilities, but it reflects a fresh design strategy and has been created by a new, youthful engineering team. The project has been overseen by MMSP Limited Managing Director, Mario Fornaris at MMSP’s base in Rugby, in Great Britain.

MMSP will treat the 2004 season as a learning process, in which it creates a car and a driving team ready for success in the years ahead. For that reason, it has gone back to first principles to create a Lancer World Rally Car that is a sound basis for a rally winner in all conditions. 2004 will be an exercise first and foremost in laying the foundations for future success.

‘’The car is quite different from our previous World Rally Car. We have made something like 6,000 new parts. We have taken advantage of the freedom permitted by the World Rally Car regulations, but my philosophy is to do very simple things and to have a good understanding of the car before we introduce more advanced systems.’’ Fornaris explained.

The Lancer WRC04’s appearance reflects the increasing importance of aerodynamics in World Championship rallying. MMSP spent almost three weeks testing in the Lola racing team’s wind tunnel, re-designing the bonnet, along with the front and rear wings, as well as the rear aerofoil. The first priority was to gain more downforce, but close attention was also paid to airflow through the engine bay to maximise cooling. It is a perfect illustration of the strenuous yet conflicting demands that the World Rally Championship imposes. Downforce is a vital element of a competitive car on high-speed rallies, but good cooling is a key requirement on a turbocharged rally car, as the ambient temperature on rallies can exceed 30 degrees Celsius and it is often highest on the rallies held at the lowest average speeds. Airflow beneath the car was also considered.