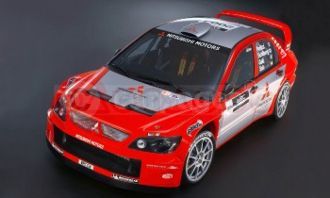 Mitsubishi Motors UK is pleased to announce that the all-new Mitsubishi Lancer WRC04 will be on show to the UK public for the very first time at the Autosport International show which takes place at The Birmingham NEC from Thursday 8th January until Sunday 11th January 2004.

Also making its debut at the show will be the 2004 Group N Lancer Evolution VIII rally car, which will be piloted in the 2004 KUMHO National Rally Championships by Brendan Crealey and Steve Harris. Brendan, from Northern Ireland, secured the top spot in this year’s Evolution Challenge, winning the prize drive for next season.

Launched only three weeks ago at the Essen Motor Show in Germany, the Mitsubishi Lancer WRC04 received a rapturous reception from the excited audience that had gathered to see it unveiled.

A completely fresh design, the new car forms an integral part of a meticulously conceived long-term plan to build on Mitsubishi Motor Sports (MMSP) distinguished record in the World Rally Championship. It will compete on all 16 rounds of the 2004 series.

MMSP will treat the 2004 season as a learning process, in which it creates a car and a driving team ready for success in the years ahead. For that reason, it has gone back to first principles to create a Lancer World Rally Car that is a sound basis for a rally winner in all conditions. 2004 will be an exercise first and foremost in laying the foundations for future success.

The Lancer WRC04 began testing in mid-October and will undergo a comprehensive development programme in readiness for its first appearance on the 2004 Monte Carlo Rally, when French star Gilles Panizzi leads an all-new driving team. In its first three months, the new Mitsubishi will face tarmac and ice in Monte Carlo, snow in Sweden, and dusty loose-surface stages in Mexico.