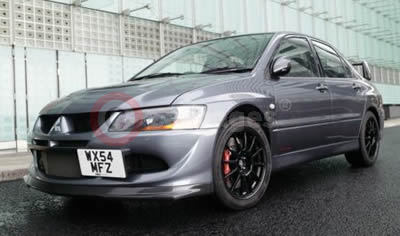 Mitsubishi Motors UK has taken the wraps off the fastest saloon car ever produced by a major manufacturer. Built to celebrate the thirtieth anniversary of Mitsubishi’s entry into the UK market, the new Lancer Evolution VIII MR FQ-400 will be built in a limited edition run of just 100 cars, and is available to order now priced £46,999.

The car was the brainchild of Mitsubishi Motors UK’s Sales & Marketing Director, Lance Bradley. "The new Lancer Evolution VIII MR FQ-400 is the ultimate expression of who and what we are as a brand. This is a versatile four-door saloon that can out accelerate supercars costing almost ten times as much."

The new model is based on the Lancer Evolution VIII MR FQ-320 and was developed in the UK by Mitsubishi Motors UK’s motor sports department, in association with tuning specialists Rampage, Owen Developments and Flow Race Engines. Together, they modified the Lancer’s legendary 2.0-litre turbocharged engine so that it now produces a mighty 405bhp and 355lb ft of torque.

This is enough to propel the FQ-400 from 0-60mph in an incredible 3.5 seconds and on to a top speed in excess of 175mph*. It is a performance that even some of the world’s most exotic supercars struggle to match. The £330,000 Porsche Carrera GT, for example, requires 3.9 seconds to sprint from 0-62mph, while the ultra-exclusive Pagani Zonda needs 3.7 seconds. The BMW M3 - hitherto the benchmark ‘everyday supercar’ - takes 5.3 seconds to achieve the same feat.

The key to the MR FQ-400’s performance lies not just in its engine, but also in its sophisticated chassis. Like every car in the Evolution VIII MR (Mitsubishi Racing) range, the FQ-400 benefits from Mitsubishi’s electronically-controlled four-wheel drive system (4WD) and a Bilstein suspension system honed at the legendary Nurburgring Nordschleife racetrack. The introduction of a new braking system on the FQ-400 also ensures that it has the ‘stop’ to match its ‘go’.

Subtle aesthetic enhancements differentiate the FQ-400 from the rest of the MR range and improve its high-speed stability. Ralliart aero mirrors, a carbon fibre front lip spoiler and a ‘sharks tooth’ rear vortex generator, are as functional as they are attractive. And it further benefits from gloss black lightweight Team Dynamics alloy wheels and red ‘FQ-400’ badging.

Inside, the sporting, focussed theme continues with a Momo steering wheel and Recaro bucket seats. The fascia has carbon fibre detailing and there’s a discreet plaque next to the gearstick, which reveals the car’s production number. The ambience is purposeful but the FQ-400 is no stripped out road racer. Electric windows and mirrors and climate control are all fitted as standard, highlighting the Lancer’s appeal as the world’s most practical and versatile supercar.

As befits its status as an official Mitsubishi Motors UK product, the FQ-400 has undergone extensive reliability testing and is supplied with a three years/36,000 mile manufacturer’s warranty. This exciting flagship can be ordered now from approved Mitsubishi Ralliart dealers.