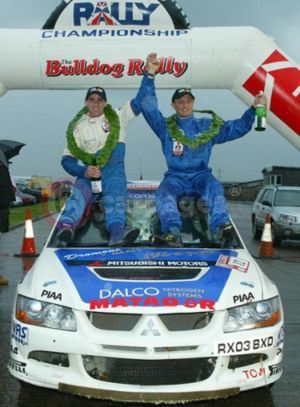 Rory Galligan and his co-driver Jonty Bolsover were crowned 2004 Mitsubishi Ralliart Evolution Challenge Champions this weekend when they won the eighth and final round of the series on the Bulldog Rally.

Their Evolution Challenge victory on this event sees them rewarded with the most coveted award in British Rallying: A fully supported works drive in a Group N Lancer Evolution VIII MR in the 2005 British Rally Championship, presented by Mitsubishi Motors UK.

Saturday’s event started from Newtown and finished in Shrewsbury, covering 75 competitive miles in some of the most famous rallying forests in Mid and North Wales. Adding to the demands on the crews were the conditions, with almost two full days of rain before the event and with continued downpours during the day, the gravel road surfaces had become slippery and unpredictable.

With the closest ever finish in all four seasons of the Evolution Challenge, the rally was to provide a head-to-head showdown between Galligan and his year-long rival, Paul Wedgbury, the two of them being the only drivers that could take the title this weekend. They went to the event neck-and-neck, a scenario which meant whoever was first across the line would become Champion.

With it all to play for, the pair of them entered the first of the event’s nine timed special stages committed to the task ahead, but just two miles into Hafren Forest Wedgbury detected a rear puncture. Although he battled on as best he could for the remaining six miles, he dropped 19 seconds to Galligan, making his quest for the title now even tougher.

After two stages and at the first service halt of the day, Galligan reported that his car’s braking had been erratic, causing a number of worrying moments. But luck was with him, as what was found to be a broken brake pipe finally expired as he stopped at the stage finish. However, the Irishman had again gone quicker than Wedgbury and was now 27 seconds ahead.

Such was the pace of the leading Evo Challenge pair they were now holding positions well inside the top ten overall and were pulling away from the other 14 Mitsubishi contenders: Philip Morrow, Nik Elsmore, Neil McCance and Gavin Cox, making up the top six positions.

With so much at stake Wedgbury went on a mission to catch Galligan and in the next leg of four stages did all he could to retrieve his deficit. But Galligan responded with a fine display of committed driving and at the second service halt in Dolgellau found had increased his advantage to 37 seconds.

Sensing something was wrong with his car’s handling, Wedgbury and his team discovered a bent rear suspension arm and replaced it for the final leg of three stages, albeit now hoping that Galligan would slip up.

"I couldn’t have wished for a better day. The car has handled and performed superbly which gave me the confidence to drive so quickly", said a smiling Galligan at the finish. "I feel sorry for Paul having a puncture so early in the event, it would have been good to battle to the end, but luck has been with us today and I’m absolutely delighted to have won the works drive. I look forward to doing my best for Mitsubishi in 2005."

Although he fought right up to the finish, Wedgbury had to settle for second place in the rally and second in the final Evolution Challenge standings. Although not the result he wanted, his performance marked a tremendous achievement for him, his co-driver Neil Dashfield and his team, which comprises willing volunteers who build and prepare the car in their spare time.

"I put everything into this year and I’m gutted not to win, but that’s just the way it is", said Wedgbury resignedly. "You need a certain amount of luck in this sport and today it wasn’t with me. Rory drove an excellent rally and I wish him all the best for next year. I just hope I can muster enough resources to come back to the Evo Challenge in 2005 - I have some unfinished business to attend to."

"I congratulate both Rory and Paul for making this the most exciting finish yet for the Evolution Challenge. Their performances have added to the profile of the series and, together with the continuation of the prize of works drive for next year’s winner, has increased the appeal of the Evolution Challenge. We now look forward to working with Rory in 2005."

Following his best performance of the season, Morrow held on to take third place and was first of the Junior drivers home. But after a calculated drive, it was Ed Stallard who took the PIAA Junior Award title, a great end to the year for the up and coming 20 year old.

Elsmore ended his season in a bizarre way when a dog jumped out in front of his car in a road section between stages six and seven, the evasive action causing the car to strike a bank and terminally damage its suspension. Although Elsmore was disappointed, the dog was unharmed and he had still done enough to claim third place in the end of year standings.

Next year’s Evolution Challenge will once again follow all seven rounds of the National Rally Championship, plus the addition of one British Championship round, the Jim Clark Memorial Rally. Organisers report that enquiries are already coming in and predict another well subscribed entry in 2005.