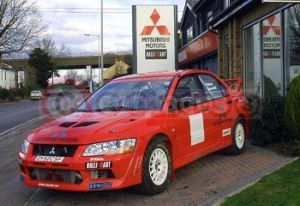 The Mitsubishi Motors UK supported Lancer Evolution VII will make its competition debut next weekend, when it takes part in the Bournemouth based Rallye Sunseeker, the first of seven rounds in the Kumho National Rally Championship.

Driven by former British Rallycross Champion, Steve Palmer from Kent and co-driven by Steve Greenhill from Hertfordshire, the team's primary function will be to test and develop a number of competition components for Mitsubishi.

The car has been built by Hertfordshire Mitsubishi dealers, Ware Garage, its Motorsport division also responsible for the pre-event preparation and on-event support.

The project will be overseen by Ralliart Europe, Mitsubishi's WRC operation, who are providing technical input and monitoring the performance of the components being tested.

In line with Mitsubishi's new global motorsport strategy and with the arrival of the new Evo VIII to Britain in April, MMUK are seizing the initiative to promote its Evolution models and expand on its unbridled Group N rallying successes.

It is intended that the components being tested on the UK works car and others like it around the world, will lead to the development of a works specification FIA Group N car by the end of 2003.

In addition, Mitsubishi are also planning to utilise the knowledge from this year's campaign and the experience gained though its Group N rallying success over the past decade, to develop a range of competition components.

Driver, Steve Palmer, realises that his season ahead is more about testing than winning:

"Not many competitors get the chance to drive for a works supported team, so I'm pleased to have the opportunity. However, I realise I have job to do this year. It is important that when we are trying out new components I feed back as much information as I can and I will need to drive with this in mind, rather than go out there to win."

The Ware Garage Mitsubishi team will enter all seven rounds of the National Rally Championship. They will run alongside the Mitsubishi Ralliart Evolution Challenge, but will not enter this one-make series for homologated Group N Lancer Evolutions, which is also supported by MMUK.