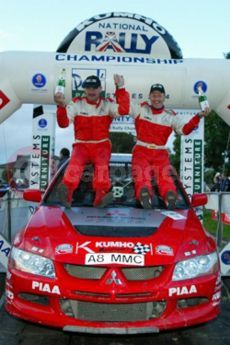 After winning the fiercely fought class for near standard specification cars on the season's opening round and finishing second on all four others, Crealey was eager for another victory, especially on this event.

With a 23 point lead in the category standings, Crealey, from Portadown and Harris, from Sheffield, left the start in Newton Stewart to contest the seven special stages in the forests of the Dumfries and Galloway Hills quietly confident they could clinch the title, with only fellow Mitsubishi driver, Martin Sansom, in a position to mount a challenge.

Right from the word go Crealey was on a mission and went fastest of the Group N runners on the opening test, a time quick enough to see him and Harris 6th overall and up amongst the highly modified WRC cars.

Having fitted a set of Pirelli tyres which ideally suited the conditions, Crealey came into the service halt following the first two stages delighted with his Mitsubishi¹s handling and speed, his six second class advantage confirming that the stages suited a production specification Evolution.

The next leg of three stages saw Crealey not only maintain his Class lead, but increase his overall position to third by the end of the fifth test, the Ulsterman revelling in some of his favourite forests. As he drove into the second service break of the day he reported:

"The stages are excellent and the car is performing perfectly. I¹m thoroughly enjoying the driving but it is important to stay focussed on getting to the finish to ensure we claim the title for Mitsubishi."

The news of Sansom's retirement on stage four meant some of the pressure was off, but that did not distract the works Mitsubishi crew and they continued at the same blistering pace.

Suddenly a puncture on the seventh and final stage changed the complexion on things and with four miles left to go Crealey opted to drive to the end of the stage. Although losing around 30 seconds others in the class were suffering similar problems and after a few anxious moments waiting for the final times to come in, Crealey and Harris were confirmed Production Category winners of the event and 2004 Production Category Champions.

"This is the result we have been working for all year", said Crealey. "I am so pleased to have clinched the Championship with a win, especially with one round still to go. I¹m even more pleased to have won the title for Mitsubishi and I must thank them for the opportunity of achieving this result."

Paul Brigden, General Manager for Ralliart, was also delighted with the result:

"It is important for us as a works team to have come out on top this year. Brendan, Steve and ADR Motorsport have done a great job in securing us this title. I would also like to thank: Walon UK Pirelli tyres, Shell Racing Fuels, Speedline Corse wheels, PIAA and HKS for their additional support".

Such was the pace of the works team on this event they ended the day 4th overall, a result which sees Crealey move up to 2nd in the overall National Championship driver¹s standings and puts Harris first in the co-driver's table.

The seventh and final round of the Kumho National Rally championship, the Bulldog Rally, takes place on 23rd October, the traditional series finale utilising some of the most famous rally stages in mid and north Wales. The team will contest this final round safe in the knowledge that they cannot be beaten in the Production Category and therefore will concentrate on consolidating their overall Championship positions.