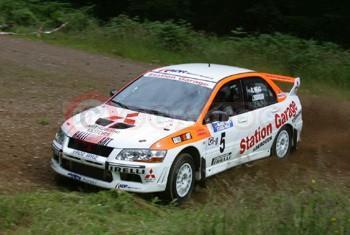 Last Saturday’s McRae Stages Rally in Scotland saw Channel Four World Rally presenters, Robbie Head and Jon Desborough take their Mitsubishi Evolution VII into the lead of the Group N Production Class, before being caught out at the end of stage three. The car driven by Head left the road went through Mitsubishi dealer's banner, bringing the TV pair’s rally to an abrupt end.

Supported by Mitsubishi dealers, Station Garage of Aberdeen and Torphins, together with Mitsubishi Motors UK, the exploits of Head and Desborough were captured on film for broadcasting on a future edition of the World Rally programme.

Although it was Head¹s first competitive event for almost a year, it was to be Desborough’s first ever rally and the former British Rally Championship driver knew that he had to take this into consideration, albeit still hopeful of securing a Production category victory.

The first of the event¹s four stages in the forests North West of Perth went well, with Head immediately returning to his familiar form and Desborough reporting to be calling the pace notes correctly most of the time. Having become more familiar with the car, stage two saw Head increase his pace, although his co-driver admitted he was now beginning to get more than just a little flustered.

Leading Group N and 5th overall, Head and Desborough set-off into stage three. All was going well until a mile from the end, when a slippery down-hill approach and a late call for a 90° left hander saw Head enter the corner carrying too much speed, the car leaving the road and dropping down a bank. Although the Mitsubishi sustained only minor damage, it was impossible to get the car back onto the road and retirement became the only option.

However, publicity for the sponsors was assured, as Head and Desborough had ironically crashed through a Station Garage Mitsubishi Motors banner as they made their unplanned excursion!

"Obviously I¹m disappointed, it¹s not the way you want to finish an event", commented Head. "But considering we were leading the class on Jon’s first ever rally - that¹s not bad. I really enjoyed driving the Evo VII as well, it ran perfectly throughout all day".

"Co-driving is the hardest thing I have ever done", commented Desborough. "No matter how much advice and tuition you get beforehand, it still is not enough to prepare you for the rally itself - but I can¹t wait to do it again".

The adventures of Head and Desborough are scheduled to be shown this Saturday (3rd August) at 11.00 am, on Channel Four’s World Rally Shakedown programme, which previews the next round of the World Rally Championship, the Rally of Finland.