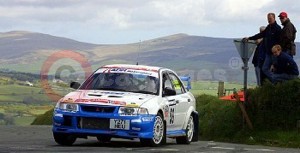 Next weekend's Jim Clark Memorial Rally will see the Mitsubishi Ralliart Evolution Challenge join the Pirelli British Rally Championship for the very first time, round three of the PBRC hosting round five of the series for Group N Lancer Evolutions.

Stepping outside its familiar territory of the Kumho National Championship for one event this season, the Evolution Challenge will be represented by nine crews on the only British mainland rally that takes place on closed public roads. Challenge Coordinator Simon Slade explains why this unique event is included in this year's Mitsubishi calendar:

"There is a mid-season gap and only one all asphalt event in the Kumho Championship, so the Jim Clark Memorial Rally fits the bill perfectly - especially as it enjoys such a high profile. As this is the first time the Evos have 'played away' it will be interesting to see what differences and opportunities exist between the British and National Rally Championships."

Now at its half way stage, the Evolution Challenge table is headed by Brendan Crealey, who currently holds a commanding 29 point lead in his Evo VII. Although top Challenge seed on this event, Crealey admits to preferring gravel rather than asphalt rallies - a rarity for an Irishman.

Next in line is Robert Swann, who will be borrowing an Evo VII from Promax Motorsport following a final stage roll on the Scottish Rally three weeks ago. Currently 3rd BRC Group N contender, this will not only be Robert's first time on this event, but his first ever all-asphalt rally as well.

There then follows a trio of Evo VI's, driven by; Mark I'Anson, Anthony Willmington and Geoff Lennox. After a season long battle I'Anson finished second in last year's series with Willmington a close third, whilst Lennox showed his tarmac pace on the Manx Rally in May and could well be the man who sprays the Evo Challenge champagne next Sunday.

A quality Mitsubishi field is completed by; James Edwards (Evo VII), Tony Thompson (Evo VI), Scott Hughes (Evo VI) and Damon Harvey (Evo V), all more than capable of collecting one of the Evo Challenge awards which are presented to the top four drivers on each round.

The Jim Clark Memorial Rally starts on Friday (4th July) evening, with four spectator stages at Edinburgh's Ocean Terminal. The event then moves to the roads near Duns and Kelso in Berwickshire, with 14 stages on Saturday and a further eight on Sunday. After a total of 160 competitive miles crews return to Edinburgh on Sunday afternoon for the finish.

Evolution Challenge entries are as follows (in start number order):