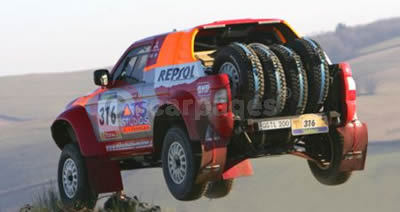 LE CREUSOT, France - The Mitsubishi Motors Repsol ATS Studios Team completed a successful final two-day shakedown for the 2005 Dakar Rally on past Monday and Tuesday, December 20th and 21st. The gruelling 16-day event begins in Barcelona on New Year’s Day and finishes in Dakar, Senegal, on Sunday, January 16th after 14 special stages in a route of 8,956 kms.

Defending Dakar Rally champion Peterhansel managed to test each of the five cars that the Mitsubishi Motors Repsol ATS Studios Team hopes will give it a record-breaking 10th Dakar Rally victory and fifth successive overall triumph next month.

"We were delighted with the test," admitted Team Director Dominique Serieys. "There were no problems with any of the cars and each driver managed to spend a fair amount of time behind the wheel.

"Stéphane, Luc and Hiroshi drove on Monday, while Nani, Andrea and Stéphane spent more time behind the wheel on Tuesday. It was a good opportunity for Andrea to sit with her new co-driver Jean-Michel Polato for the first time and gain some more experience with the new Mitsubishi L200 Pick-Up."

The team will now make some minor final modifications to the competition cars and the fleet of support vehicles and trucks at its Pont-de-Vaux base, near Lyon, before leaving for Barcelona on Monday, December 27th.

"It was a useful exercise for the entire team," said Isao Torii, the President of Mitsubishi Motors Motor Sports. "There were no problems at the shakedown, everyone is well prepared and we are all looking forward to the official start in Spain and the first of the traditional African Dakar stages in Morocco on January 3rd."