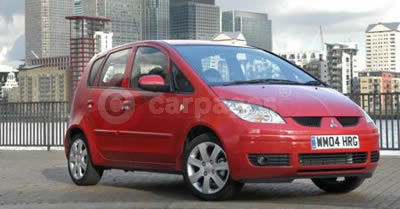 One of the most coveted automotive awards in the international arena yesterday went to Mitsubishi Motors. As the best new car of the year in its category, the all-new Colt was awarded the "Goldenes Lenkrad 2004" (Golden Steering Wheel 2004) by Europe’s best-selling Sunday paper, "Bild am Sonntag (BamS)". During a gala event at Ullstein hall of the Springer publishing house in Berlin attended by roughly 400 representatives of the business and political community, the media and sports, the prize was presented to Mr. Akira Kijima, Managing Director (Representative Director) Head of Product Operations, Mitsubishi Motors Corporation.

In a preliminary poll "Bild am Sonntag" readers had selected five cars each in different classes for final judging by the jury. Competing against the Colt in class 1 (small cars) were Fiat Idea, Kia Picanto, Lancia Musa, Peugeot 1007, Renault Modus and Smart Forfour. The Colt made the strongest favourable impression on its critics - above all in the categories of quality of workmanship, versatility, comfort, interior space, and ease of operation rated by the panel.

The independent jury is comprised of twenty-four renowned experts, motorsport professionals and other prominent personalities. While the racing drivers rated criteria related to driving dynamics such as engine performance and handling, seasoned technical experts evaluated items like quality of workmanship, safety, cost of repairs and environmental impact. The "non-expert" celebrities on the jury looked at such vehicle features as exterior and interior design, ease of operation, comfort, interior space and value for money.

"The Golden Steering Wheel" first sponsored in 1976 by publisher Axel Springer was presented for the 29th time this year. The award carries particular weight not least due to the fact that it enjoys an exceptionally large platform in terms of publicity and popularity. As Europe’s best-selling Sunday paper, "Bild am Sonntag" currently has a circulation of 2.1 million copies wiith a reach of 10.8 million readers (IVW).

Mitsubishi has won the "Goldenes Lenkrad" three times in the past - in 1984 for the Galant, in 1988 for the second-generation Colt, and in 1992 for the first successor model of its off-road classic, Pajero.

Colt’s victory in the Goldenes Lenkrad is echoed by success in the field of quality and service. The Cologne-based auto magazine, "Auto Zeitung", conducted a survey among readers to judge the service and product quality of their automotive brand. In the overall ranking, Mitsubishi achieved a strong third place, while Geman manufacturers were by and large ranking among the bottom third of the list. Prior to this survey, Mitsubishi had received a similarly good rating in the most recent study by U.S. market research institute J.D. Power based on comparable criteria. In this survey, as many as four Mitsubishi models were placed in the top twenty.

Launched in successive waves since May 2004 in Europe, the NedCar-built Colt has reached 13,000 customers so far (end October 2004) fuelled by the recently launched and strategically important 1.5 litre diesel and 1.1 litre petrol engines. Furthermore, sales in the UK, Scandinavia and Eastern Europe (20% of the Colt 5 door volume) followed Western Europe in September, whereas the Colt CZ3 and Colt CZT (40 % of the overall Colt volume) will be launched during the first quarter of 2005.