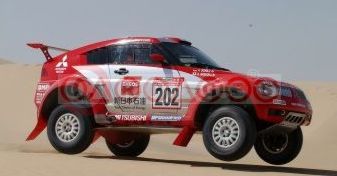 The victory completed a hat-trick of Mitsubishi Motors Team victories on the gruelling 19-day race across five countries, which had started in Marseilles on New Year's Day. Masuoka, the defending champion at the wheel of a Mitsubishi Pajero* Evolution, became the first Mitsubishi driver to win the event on two occasions.

"I am so very happy to win this 25th Dakar Rally," said Masuoka. "This year was a great race. It was fast and there were some good stages in Tunisia and Libya. It was hard. Every day we were doing 160/180 km/h and it was exciting to race against (Stephane) Peterhansel. But in the second half we were more careful and reduced our speed to save the car. I was waiting in case he made a mistake.

"I feel sad for Stephane because he had a good race. One small mistake was expensive. It was important for Mitsubishi to win this race and I hope that this continues. I look forward to competing with Stephane again in the future.

"The car is fantastic. It was developed last year and finished at the end of August. Mitsubishi have worked very hard on the suspension settings. We tested the car for two weeks in Morocco and it showed potential from the start."

It was also the second Dakar victory for Schulz, the winner in 2001 with Jutta Klenschmidt. "For me it was maybe an easier victory this time. I have now won twice with Mitsubishi as well. Maybe in 2004 if we can develop the car still further we can win again," said the German.

The French pairing of Jean-Pierre Fontenay and Gilles Picard finished second overall in their classic Pajero, despite losing 45 minutes in soft sand in Tunisia and sustaining several punctures.

"Gilles and I are obviously happy to take second position," said Fontenay. "But we would have liked to do this in a different way. We are disappointed for Stephane and Jean-Paul (Cottret), because they were driving a perfect race. It has happened before and it will happen again."