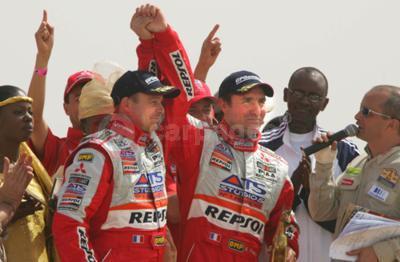 Mitsubishi’s long experience of off-road racing experience came to the forefront, when the Japanese manufacturer clinched a fifth successive victory in the world’s most difficult off-road rally.

Peterhansel’s team mate Luc Alphand and co-driver Gilles Picard made it an emphatic 1-2 for the Mitsubishi Motors team by taking the runner-up position in their Mitsubishi Pajero/Montero Evolution. In the 27-year history of the world’s most famous off-road rally no manufacturer of cars, bikes and trucks can match the Japanese company’s winning record.

Akira Kijima, Managing Director Head of Product Operations for Mitsubishi Motors and responsible for motor sport activities, said: "I am proud that we were able to achieve the first ever fifth successive victory on one of the toughest events in the world.

"Mitsubishi Motors’ involvement in motor sport is not merely a promotional activity, but is really at the heart of the Mitsubishi Motors brand. We strive to take our cars to the limits of performance by competing in such events as the Dakar and the World Rally Championship (WRC) and feed the technology and know-how acquired directly back into all of our production cars. This ensures that our production vehicles not only have improved durability and safety, but also good road performance and driving capability.

"Mitsubishi cars have long been known for their sturdiness, endurance and robustness and it is these qualities that are derived from our motor sport participation. We intend to strengthen motor sport activities and, in so doing, raise the value of the Mitsubishi Motors brand."

"I am very proud of the hard work put in by the entire team," said IsaoTorii, President of MMSP. "When I visited Atar at the half-way point I saw the appalling working conditions that the whole team had faced and it is a testament to their determination that we have achieved this superb success."

Mitsubishi’s Peterhansel took the lead as the event headed across the wastelands of Mauritania and won from the front over the remaining special stages through Mali and Sénegal. Team mate Alphand shadowed him to the finish on his debut with the Mitsubishi team and Spaniard Joan Roma - the winner last year on a motorcycle - finished sixth overall in the third Mitsubishi Pajero/Montero Evolution.

Twice former winner Hiroshi Masuoka, from Japan, had been one of the pre-event favourites with German co-driver Andreas Schulz. But he was withdrawn from the race in Atar after delays cost him valuable time. The team duly took the decision to concentrate resources on the three surviving cars, but Masuoka had been running as low as 124th position before climbing back to sixth overall at the time of his retirement.

Germany’s Andrea Mayer and French co-driver Jean-Michel Polato were forced out of the race after a stone damaged the crankshaft sensor in their Mitsubishi L200 Pick-Up. The co-driver attempted to repair the damage, but team management reached the decision to withdraw the car from the race in Atar rather than overstretch the support team which was preparing to leave for another bivouac.

The event began in Barcelona on New Year’s Eve and took place over 15 timed special stages in five countries. Mitsubishi won five timed sections, with Peterhansel winning four and Alphand taking the fastest time through the Tidjikja to Atar section.