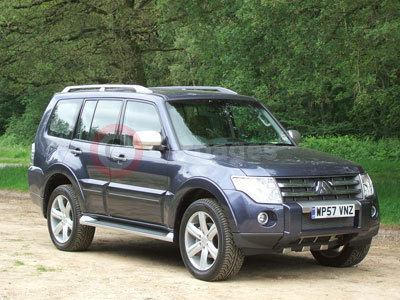 The fourth generation Shogun went on sale in February 2007 and Mitsubishi tells us that this latest version is not so much a facelift but more of an ‘evolution’, with over 70 per cent of the components renewed.

Rather than going soft, when it came to the latest incarnation, MMC retained the rugged, off-road character that has served the company so well, resulting in no less than 12 Paris-Dakar rally wins. Clearly a popular car, with over 2.5 million sold worldwide since its launch in 1982 (nearly 93,000 of those in the UK), MMC wasn’t about to throw the baby out with the bath water, when it came to the new version.

Nor was the company about to change the flexibility in choice of body styles and equipment levels. So, there’s the option of the 3-door, short wheelbase or a 5-door, long wheelbase versions. There are also four trim levels; Equippe, Warrior, Elegance and the new top-of-the-range, Diamond.

When asked, existing customers said that they wanted a more evolutionary design but without losing any off-road ability. By that, I think that they meant more modern looking, please. The result is a squared off profile but a more rounded nose than of old. The windscreen remains flat and upright, at the blunt end of the short bonnet while the bold wheelarches make a clear statement of intent. To please the off-road fraternity, the front and rear overhangs have been kept to a minimum with the skid plates clearly visible underneath.

Although the front end has been softened somewhat, the rear end with its side-hinged tailgate cannot be described as pretty but Mitsubishi has made the best of it. The main problem is that the spare wheel is mounted on the rear door, which, in the case of the test car, is a full size, 20-inch wheel so, it is big and bulky. This sits in a new hard casing which is body coloured and its presence is a necessary evil, so to speak. MMC has utilised the new retaining bar by placing the number plate in the centre above the fog light and including the rear view camera, which is standard on all but the Equippe model. The whole spare wheel unit is set 50mm lower than before for better rearward visibility.

Of course, having the spare on the outside means that it doesn’t take up precious space inside, so the carrying capacity isn’t compromised. Apart from the obvious difference in length, the 3- and 5-door versions differ in outlook. The shorter Shogun is visibly sportier with sculpted bumpers, while the 5-door is more of a family car. As such, the bumpers are less pronounced and it is altogether more subdued but it does have the advantage of the Hide&Seat third row. This two-seater bench, along with removable, full-size headrests, is set into the floor where the spare wheel normally resides and is easily pulled up and locked into place when needed.