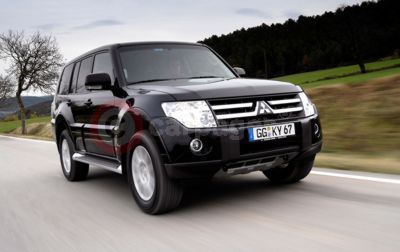 Mitsubishi Motors fourth generation Shogun off-roader, which arrives on the 1st March 2007, is a progressive evolution that combines authentic four-wheel-drive go-anywhere ability with bold and muscular new styling, complemented by Euro IV-compliant turbo diesel power and the choice of either a three-door short or five-door long-wheelbase chassis.

As well as option of three or five doors, Shogun buyers will have the choice of a four model line-up - the familiar Equippe, Warrior and Elegance models as well as the new luxury Diamond range topper. As always, the Shogun comes packed with an array of standard safety and luxury equipment. All models come with ASTC active stability and traction control, alarm and keyless entry, climate control, twin front, side and curtain airbags, ABS anti-lock brakes backed up by EBD electronic brakeforce distribution and 17inch alloy wheels fitted as standard.

The list of standard features may be much longer but pricing for the new Shogun remains unchanged, emphasising Mitsubishi Motors value-for-money policy. Prices range from £22,949 for the three-door Equippe model through to £34,999 for the five-door Diamond model.

The new Mitsubishi Shogun draws on 70 years of off-road heritage that includes an unbeaten 11 Paris-Dakar rally wins. Its monocoque chassis with built-in ladder frame offers both peerless off-road ability and responsive on-road driving dynamics. Using a higher number of key spot-welds, additional structural adhesives and a greater use of high-tensile steel has significantly stiffened the chassis, while the level of anti-corrosive zinc plating is significantly higher than before. The result is a quieter, safer and more dynamic basis for the double wishbone front and multi-link rear suspension, now fitted with uprated springs and dampers.

Beneath the Shogun’s bonnet sits a heavily revised version of Mitsubishi’s acclaimed 3.2-litre four-cylinder turbo diesel engine. Now featuring an advanced high-pressure common rail fuel injection system, the 3200cc unit produces 168bhp at 3800rpm and a hefty 373Nm of torque at 2000rpm when hooked up to Mitsubishi Motors INVECS-II automatic gearbox with sequential ‘Sports Mode’. In models fitted with the Shogun’s revised five-speed manual transmission, outputs are 158bhp at 3800rpm and 381Nm at 2000rpm. As well as being more powerful and more economical, the engine is also significantly quieter and more refined, with noise levels reduced by an average of four decibels across the rev-range.

The lighter short-wheelbase Shogun comes with 290mm front and 300mm rear disc brakes gripped by two-pot calipers, while the heavier long-wheelbase gets larger 332mm discs at the front and rear, with four-pot caliper up front and two-pot at the rear. This braking system is enhanced by ASTC active stability and traction control that uses variable torque distribution and individual wheel braking to enhance traction, stability and safety.

The Shogun’s interior - from its A-pillar grab-handles to its lofty driving position – reflects its rugged authentic all-season ability. The all-new cabin architecture features a contemporary integrated centre console that houses a Multi-Information Center Display for the climate and audio controls. Particular attention has been paid to creating a robust feeling within the cabin, with an intuitive layout and easily understood graphics and instruments.

At 4385mm long, 1875mm wide and 1880mm high, the short-wheelbase three-door Shogun combines dynamic, athletic styling with a spacious and comfortable cabin. The long-wheelbase version (4900mm long, 1875mm wide and 1990mm high) features Mitsubishi Motors innovative ‘Hide&Seat’ system that quickly and easily converts the Shogun from a five to a seven-seater. When additional seating is required, two seats quickly and easily fold out from the boot floor to create a third row of seats, complete with integrated head rests.

Since its debut in 1982, Mitsubishi has produced 2.5million Shogun models, with 92,954 sold in the UK. The Mitsubishi Shogun is a car that inspires exceptional brand loyalty, with seven in ten customers retaining a Shogun. In its first full year of sales, Mitsubishi Motors expects to sell 6000 Shogun models, with the long-wheelbase version accounting for over tow thirds of sales. Some 65% of total sales will be the high-end specification Elegance and Diamond models.