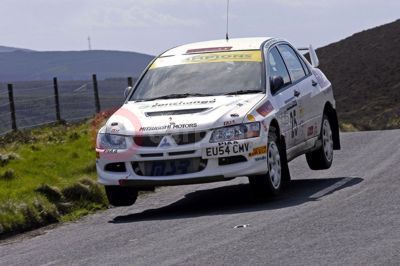 Mitsubishi Motors UK are pleased to announce the Mitsubishi Ralliart Evolution Cup which will run as a Class for homologated Group N Lancer Evolutions in both the MSA National Gravel Rally and the Rallymasters Championships.

With the Evolution Challenge moving to the British Rally Championship in 2006, series organisers are aware that some Mitsubishi competitors may not wish to compete at International level and therefore now offer support for those who choose to enter National status events.

Vouchers, which can be exchanged for Mitsubishi parts, will be awarded to the first three competitors on each round and at the end of the year, the total prize fund value being in excess of £12,000.

"We are pleased to offer continued support for Mitsubishi competitors at National level. We see this initiative as a way of providing feeder series’ for the Evolution Challenge and trust it will give teams an incentive to compete in Lancers in both the MSA National Gravel and Rallymasters Championships".

Organisers are keen to point out that that these two series’ are designed to support the Evolution Challenge, where again in 2006, registered competitors will be able to battle for the best prize in British rallying: The chance to become a Mitsubishi works driver in 2007.