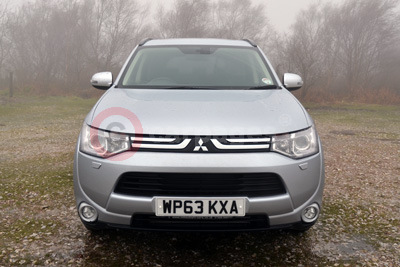 The new Mitsubishi Outlander was released in the summer of 2012; with planned sales in 2013 of around 2,500 units.

There is a choice of five or seven seats depending on the model; ‘GX-1’ and ‘GX-2’ have five seats as standard while the other models come with 7-seats.

At the time of this test there was one engine option, a 2.2-litre diesel producing 150 PS with the choice of either 6-speed manual or 6-speed automatic transmission - all models are four-wheel-drive. Since the test Mitsubishi have introduced a 2.0-litre petrol hybrid Outlander PHEV to the line-up, which we hope to review shortly.

We tested the top-of-the-range Mitsubishi Outlander 2.2 DI-D GX-5 diesel with automatic transmission finished in metallic Cool Silver paint finish, which at the time of testing cost £33,999 plus £450 for the metallic paint.

The Outlander is powered by a Euro 6 compliant 2.2-litre (2268cc) Di-D diesel engine, we tested it with the six-speed automatic transmission option with four-wheel-drive (there is a six-speed manual option).

The six-speed automatic we were testing� was relatively smooth if not the quickest box on the market it made for laid back driving but it could be a bit laggy, it features paddle shifts on the back of the steering wheel should you wish to manually change gear.

Mitsubishi claim that the 2.2-litre engine with automatic transmission is capable of 39.8 mpg urban, 55.4 mpg extra urban and a combined figure of 48.7 mpg (NEDC figures) - we were achieving around 34 mpg touring, rising to 39 mpg on the motorway, which was slightly disappointing. CO2 emissions are recorded at 153 g/km.

There is an ECO button which seems to retard the throttle responses and gear changes - and it tames down the air-conditioning but we tended to then steam-up in the damp winter weather.

On the road the Outlander does not have the best of road manners, it is a little ponderous with too much body roll through its soft suspension - some may like the set-up and it is great at soaking up all but the most vicious of potholes and is a boon off-road. But ultimately the handling is safe and very predictable with nothing of great concern.

You are not going to be able to venture too far off-road but it will cope well with country lanes especially in our inclement weather that seems all the norm these days. It lacks locking differentials and a low ratio box to go off into the wilds but it will transverse farm tracks and fields with some reassurance.

It has a Multi-Select’ four-wheel drive system that supports three driving modes to suit the road conditions which are controlled by the driver using a push button in the centre console. In ‘4WD ECO’ mode - the front-wheels are driven to aid handling and fuel consumption but when road conditions dictate� it will provide power to the rear wheels automatically if needed. In the default ‘4WD auto’ mode the Outlander is in full four-wheel-drive with the car automatically transmitting the power to the axle that needs the most torque. ‘4WD LOCK’ mode keeps the Outlander in permanent four-wheel-drive for off-road or snow-covered road use with most of the available torque going to the rear wheels.

In summary the diesel engine is capable if not the most refined or eager of units and the handling is fine unless you are expecting the dynamics of a BMW X3.

This is a 8-year+ news article, from our Mitsubishi archive, which dates back to the year 2000.

If in doubt check with your local Mitsubishi dealer as car prices and technical data will have changed since 2014.

Mitsubishi Outlander Images may not be UK specification cars. Colours and exterior and/or interior elements may differ from actual models.