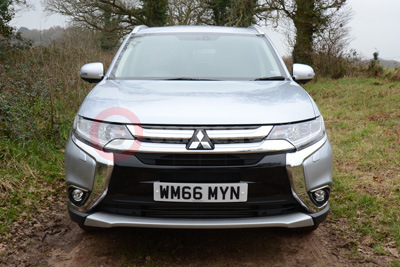 This generation Mitsubishi Outlander was launched in the summer of 2012 and has gone onto be well known for its tax efficient PHEV (petrol hybrid / electric vehicle) model. We are testing the diesel model which may fair a better bet for private owners who do lots of miles or company users who are not too worried about paying that extra.

The market has changed a lot since its launch in 2012 with new models from Land Rover and Skoda entering the market. The Outlander was revised for 2017 and it is this model we drive.

We tested the top-of-the-range Mitsubishi Outlander '4' powered by a 2.2 diesel engine with automatic transmission finished in the metallic Cool Silver paint finish, which at the time of testing cost £33,499 plus £450 for the paint.

The Outlander we were testing was powered by a four cylinder Euro 6 compliant 2.2-litre (2,268cc) diesel engine, with the six-speed automatic transmission option and four-wheel-drive (there is a six-speed manual option depending on spec).

We found six-speed automatic transmission was up to the job, even coping well with demanding Welsh roads - you can manually select gears from the paddle shifts on the reverse of the steering wheel should you wish, but there was seldom the need.

According to the official NEDC test data the 2.2-litre diesel engine with automatic transmission is capable of 40.9 mpg urban, 54.3 mpg extra urban and a combined figure of 48.7 mpg - we were achieving around 33.2 mpg touring, rising to 38 mpg on the motorway, which was slightly disappointing, although to be fair our car had only done 800 miles at the start of the test, so you should expect an improvement as the engine beds in. CO2 emissions are recorded at 154 g/km.

There is an ECO button which retards the throttle responses and gear change points - and it tames down the air-conditioning, although it was hard to notice any fuel improvement - although with it disengaged the car seemed more responsive.

There have been some noticeable improvement to the Outlander’s road manners - it is less ponderous than previous models, although it is hardly the most dynamic of SUVs. The suspension is soft and there is too much roll through fast changing bends to enter them with any enthusiasm. Saying that the ride quality is very good, and it is great at soaking up all but the most vicious of potholes. In summary, if you behave yourself the ride and handling are good, just not exceptional.

Off road, you are not going to be able to venture too far but it will cope well with country lanes especially during the Welsh inclement weather that we encountered during our test week. It lacks locking differentials and a low ratio gearbox as do most SUVs at this price point, which prevents it going too far into the wild but it will transverse farm tracks with some reassurance.

It has a Multi-Select’ four-wheel drive system that supports three driving modes to match the driving conditions, the modes are controlled by the driver using a push button in the central console. In ‘4WD ECO’ mode - the front-wheels are normally driven to aid fuel consumption but when road conditions dictate it will provide power to the rear wheels automatically if needed. In the default ‘4WD auto’ mode the Outlander is in full four-wheel-drive with the car automatically transmitting the power to the axle that needs the most torque. In ‘4WD LOCK’ mode keeps the Outlander in permanent four-wheel-drive for off-road or on snow-covered road use with most of the available torque going to the rear wheels.

There is 190mm of ground clearance, with an approach angle of 21-degrees, 21-degree departure and ramp break-over of 21-degrees - the wading depth is 400 mm. The braked towing capacity is 2000 kgs and unbraked 750 kg.

In summary, the Outlander copes well - and as said before it is not exceptional but it very good at soaking up the miles and would provide great service.

This is a 5-year+ news article, from our Mitsubishi archive, which dates back to the year 2000.

If in doubt check with your local Mitsubishi dealer as car prices and technical data will have changed since 2017.

Mitsubishi Outlander Images may not be UK specification cars. Colours and exterior and/or interior elements may differ from actual models.