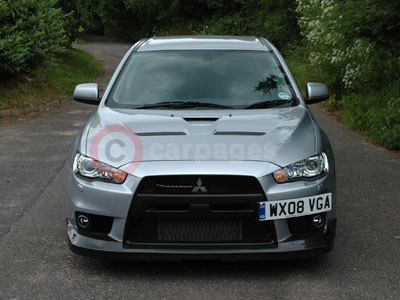 Mitsubishi has a racing pedigree spanning over 40 years of Motor Sport, including four drivers and one Manufacturer World Rally Championships. The all-new Mitsubishi Lancer Evolution X is the latest incarnation of Mitsubishi's rally inspired cars.

The Mitsubishi Lancer Evo X was introduced to the UK on 1st March 2008, following on from a long line of Evo's, all legendary in their own right. Prices for the Mitsubishi Evo X start at £29,499 and rise to £49,999 for the newly introduced FQ-400.

We drove the Mitsubishi Lancer Evolution X FQ-360 GSR, which at the time of testing was the most powerful of the Evo range.

We drove the Mitsubishi Lancer Evolution X FQ-360 which is endowed with 359 bhp and is enough to catapult it from 0-62 mph in an eye watering 4.1 seconds and carry on to an electronically limited 155 mph. We understand that 'FQ' stands for something 'expletive' quick and even if it doesn't it is f-quick. There is very little lag from the turbocharger and once it cuts in all hell brakes loose. As the revs build up, we went from "yes this is quick" to "good grief" and then it all gets a little hazy as you change up the gears.

The five speed manual gearbox is easy to use with the four ratios being quite close although a sixth gear would have been nice when cruising, especially on the motorway - as the Mitsubishi Evo X can whine on a little and we do have to think of the environment.

It is amazing how docile the Mitsubishi Evo X FQ-360 can be for such an angry looking car, it is quite happy to potter around town behaving itself without any drama. Although you may find the clutch on the heavy side should you need to commute daily in heavy traffic.

We achieved around 24 mpg touring (light footed driving) and on the motorway we were returning around 32 mpg - use the Mitsubishi Evo as it is designed and this will drop considerably. The official fuel figures are Urban 12.9 mpg, Extra Urban 26.9 mpg and a combined figure of 19.9 mpg, so were quite happy with our figures.