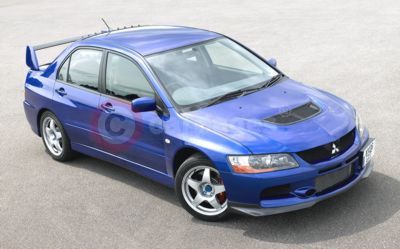 Mitsubishi Motors UK has unveiled a new and more powerful version of the iconic Lancer Evolution IX supercar. A development of the FQ-340, the new FQ-360 features a 366bhp version of Mitsubishi’s 2.0-litre turbo engine. Available to order now, priced at £35,504, it reaffirms the ‘Evo’s’ reputation as the everyday supercar, offering pace and practicality at an affordable price.

Making its debut at the British Motor Show, the new FQ-360 joins a three car Lancer Evolution line-up, consisting of the FQ-300, the FQ-320 and the FQ-340, all of which continue. Orders can be placed at any Mitsubishi Ralliart dealer with first deliveries expected in September.

The FQ-360 has been developed by engineers from Mitsubishi UK’s motor sport and performance division, Ralliart, which was also responsible for the limited edition FQ-400. Launched in 2004, the FQ-400 was the fastest-ever production Mitsubishi and the new FQ-360 shares some of its key components.

Mitsubishi’s engineers sought to improve the performance of the 1997cc 4-cylinder 4G63 twin scroll turbo engine with the introduction of a high pressure fuel pump and a high-flow catalytic converter, both of which were employed in the FQ-400. The Engine Control Unit (ECU) has been fully reprogrammed to create a car that delivers 366bhp at 6887rpm and 363lb ft of torque at a lowly 3200rpm.

The torque output is the key to this car’s character. The peak output of 363lb ft is 8lb ft more than the FQ-400 produced and is delivered 2200rpm lower down the rev range. It’s also 18lb ft more than the FQ-340. “We’ve worked hard to optimise the FQ-360’s driveability,” says Paul Brigden, general manager, Ralliart. “We wanted to deliver the best possible driving experience, rather than concentrating on a headline-grabbing power output.”