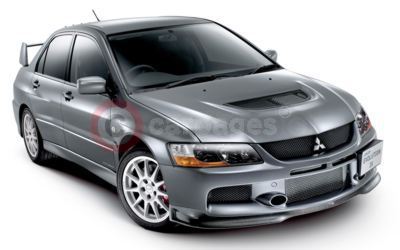 The Lancer Evolution IX MR is the final version of a car that can trace its roots back to the original Lancer Evolution of October 1992. Since then, success on the rally stage has been accompanied by a continuous evolution of the road car. This final incarnation of the current model marks the culmination of 14 years of continuous development and marks a fitting finale for the everyday supercar.

Subtle changes to the specification of the 1997cc 4-cylinder 4G63 twin scroll turbo engine have created a car that delivers an even higher level of performance. True to Mitsubishi's philosophy of providing "overall driving quality", the engineers in Japan have made subtle modifications to the turbocharger. The introduction of titanium aluminium alloy turbo fins and reduction in the compressor wheel inlet diameter have improved the engine's response throughout the rev range.

The Lancer Evolution FQ-360's performance underlines its reputation as the most affordable supercar on the road. This is a practical, five-seater saloon car that can sprint from 0-60mph in just 3.9 seconds and on to an electronically limited top speed of 157mph. By comparison, the Porsche 911 Carrera 4S, which costs almost twice as much, takes 0.9 seconds longer to reach 60mph from rest.

The engine upgrades are accompanied by subtle but effective changes to the 'Evo's' MacPherson strut front and multi-link rear suspension. Eibach springs have been introduced to complement the Bilstein shock absorbers. These new springs lower the ride height by 10mm at the front and 5mm at the rear, which enhances the car's high speed stability and allows the Super Active Yaw Control (Super AYC) system to function more effectively. The latter has also been improved to provide a greater distribution of power between the rear wheels, increasing traction, especially on loose surfaces. Mitsubishi's electronically-controlled four-wheel drive system (4WD) is carried over unchanged.

The aesthetic changes are modest and functional. A new carbon fibre front lip spoiler has been developed to provide additional downforce and improve high speed stability.  A rear carbon fibre vortex generator comes fitted as standard. The 11-spoke Speedline Turini alloy wheels are also new and mimic those fitted to Mitsubishi's tarmac spec rally car. The Yokohama ADVAN AO46 235/45 ZR17 tyres are carried over unchanged, while the Brembo braking system ensures that the Evolution IX MR has the stop to match its go.

The changes inside are equally subtle. Automatic headlights and privacy glass are introduced for the first time, the seats have been redesigned with 'IX MR' motifs, the dashboard panel is now finished in 'Piano Black' and there are 'Lancer EVOLUTION' aluminium scuff protectors on the door frames. Enthusiasts will be delighted to hear that the rally-bred Recaro seats and exquisite Momo steering wheel remain present and correct.

The Lancer Evolution has always been a thoroughly practical, everyday car, and the final edition is no exception. The cabin can seat five in comfort and the boot has a capacity of 530 litres. It is also comprehensively equipped with air-conditioning, electric windows and mirrors, remote central locking and CAT 1 alarm included in the specification.

As you'd expect from Mitsubishi, the FQ-360 by HKS is covered by a 3-year Unlimited Mileage Warranty, a 3-year Pan European Recovery Service and a 6-year Anti-Corrosion Perforation Warranty.

Pricing will be carried over from the previous Evolution IX FQ-360 as follows:

This is a 15-year+ news article, from our Mitsubishi archive, which dates back to the year 2000.

If in doubt check with your local Mitsubishi dealer as car prices and technical data will have changed since 2007.