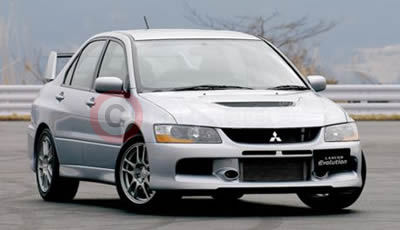 The ninth generation of Mitsubishi’s award-winning Lancer Evolution supercar will go on sale in the UK from 1st June. A logical development of the special edition Evolution VIII MR, the Lancer Evolution IX combines a series of detail improvements with an unchanged price tag. Three UK-specific models will be offered: the FQ-300 costs £27,999, the FQ-320 retails for £29,999 and the flagship FQ-340 is priced at £32,999.

The dramatic, rally-bred lines of the Lancer Evolution are instantly familiar, but ‘Evo spotters’ will notice a number of subtle revisions. A redesigned front bumper echoes the style of Mitsubishi’s latest World Rally Car and incorporates additional cooling ducts. At the rear, the new bumper features a diffuser for improved aerodynamics, while the new-design five-spoke Enkei alloy wheels help to reduce the unsprung mass of the car and improve the handling.

Inside, the simple, driver-focussed fascia is retained and so are the Recaro sports seats and exquisite Momo steering wheel. The ‘Evo’ has always been a practical supercar and the IX offers generous accommodation for five adults and their luggage. Air-conditioning, electric windows, four airbags and CAT-1 alarm are standard on every model, while the FQ-340 adds SmartNav satellite navigation and leather/Alcantara seats.

Arguably the most significant dynamic change is the introduction of MIVEC variable valve timing technology, which improves the engine’s efficiency throughout the rev range. Increased performance at high engine speeds and a smoother torque curve is accompanied by a 3% improvement in fuel economy and exhaust emissions.

The Bilstein suspension system introduced on the Lancer Evolution VIII MR is retained for the IX, with the exception of the rear springs, which are shorter than before. This lowers the car slightly, improving rear-end stability and enabling the Lancer’s electronically-controlled 4WD system to function more effectively. The Lancer Evolution remains the consummate driving tool, engaging and rewarding the experienced, while flattering the novice.

The Evolution IX is the final instalment in a Lancer series that dates back to the Evolution I of 1992. Since then, Lancer rally cars have won the driver’s World Rally Championship on four occasions, while the Evolution road cars have established a reputation as the everyday supercar. An all-new and radically different Lancer Evolution will be launched by Mitsubishi Motors in 2007.